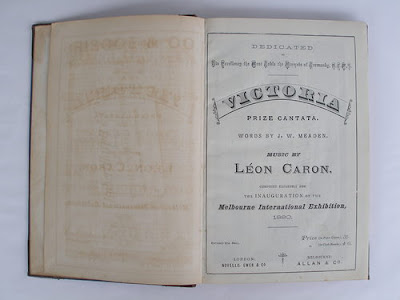 Léon Caron was born in January 1850, and studied the organ under Alexandre Guilmant in Boulogne-sur-Mer, and went on to the Conservatoire in Paris in the late 1860s. His studies were cut short by the traumatic events of the Franco-Prussian War and its aftermath, and he was one of the thousands of communard refugees who fled to London in 1871. There, he played violin in the orchestra of Jules-Prudence Rivière at the Alhambra Theatre, and shortly afterwards sailed to America, where he played briefly for the Theodore Thomas Orchestra in New York. Caron continued on to Australia, arriving at Port Melbourne in 1876. Soon afterwards he made his debut as a conductor in the Melbourne Opera House, and promptly accepted the position of conductor with the Lyster Grand Italian Opera Company.

Caron composed his original cantata, Victoria, in collaboration with the businessman, temperance advocate, and poet J. W. Meaden, who also wrote and published under the pseudonym “Eucalyptus.” According to the biographical sketch by John Vale that accompanied his edition of The Poetical Works of J. W. Meaden:

In 1854, before reaching the age of fourteen, Mr. Meaden left his native land, alone, and going first to the Brazils, visiting Monte Video and Rio de Janeiro, arrived eventually at Melbourne by way of the dreaded Cape Horn, on board the Twee Gezusfers…Mr. Meaden had a poet’s insight of the future. He realised that he was privileged to take part in the founding of an important community. He saw visions of a vast population, with lives brightened by the sunlight of material prosperity in larger measure than was the case in the old lands, and in more general enjoyment of the beneficent influences of education, and of leisure which could be the mother of culture; and he ardently desired that the greatness of the coming people should have as its crown the righteousness which exalteth a nation. He knew the widespread influence of strong drink in preventing the realisation of similar aspirations in other lands, and patriotically resolved to serve his adopted country by at once enlisting with the soldiers of abstinence.

With its text by Meaden, and Caron’s score, Victoria won the cantata competition to mark the opening on October 1, 1880, of the Melbourne International Exhibition. The prize was 100 guineas. This sprawling work, requiring an orchestra of 125 and a chorus of 1000, was conceived in two parts. Part I describes “Victoria sleeping amidst the primaeval solitudes and awakened by voices foretelling speedy discovery and development,” while Part II reveals Victoria, now “Queen of the South,” “engaged in various pursuits—pastoral, agricultural, and industrial”—and engaged in dialogue with a company of nymphs, each “representing the various nations of the earth.” The work was dedicated with permission to the Governor, the Marquis of Normanby.

Afterwards, Caron conducted many English-language performances of opera in Melbourne, including the local premieres of Thomas’s Mignon, Bizet’s Carmen, Massé’s Paul et Virginie, and Auber’s Fra Diavolo. In 1889 he joined J. C. Williamson’s Royal Comic Opera Company, giving the Australian premier of Gilbert and Sullivan’s The Yeoman of the Guard.

Caron published a substantial quantity of his own music, including an “Ave Maria” for soprano or tenor with piano or organ accompaniment and violin or violincello; “Love Is Gold” (a reverie and valse chantante); an operetta entitled Mam’zelle Nitouche, including the “Grand galop de bravoure” and the celebrated “Nautch Song”; Dick Whittington and His Cat, an Easter pantomime written by William Wade, with lyrics by Harry Taylor; a “stupendous spectacular extravaganza” entitled The Forty Thieves; the “First Kiss Valse”; salon works for piano, and numerous treacly songs, including “When Thou Art Near,” “It May Be Love,” and “I Love But Thee,” the latter with lyrics by his longstanding collaborator Bert Royle. Caron made an extensive number of other arrangements and compositions for the theater, including music for Turqoisette; or, A Study in Blue, a ballet which premiered in 1893; a “grand spectacular musical pantomime extravaganza” entitled Matsa, Queen of Fire; or, The Apples of Isis, The Dates of Osiris, and The Little People of the Mountains of the Moon, Onn and Oph, and, finally, for the bizarre Christmas pantomime Djin-Djin, the Japanese Bogie Man; or, The Great Shogun Who Lost His Sons and the Little Princess Who Found Him, A Fairy Tale of Old Japan, which called for some extremely unusual sound effects. Léon Caron died of a heart attack shortly after touring New Zealand for J. C. Williamson in 1905.

Posted by Angus Trumble at 4:55 PM