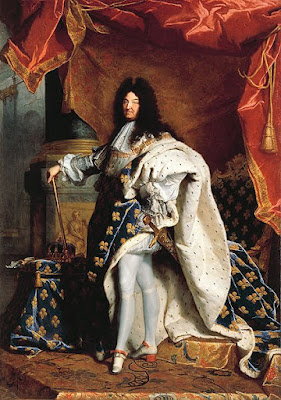 Why did men of rank in eighteenth-century Europe wear shoes with scarlet heels? To some extent the answer to that question is obvious, as this portrait of the Sun King by Hyacinthe Rigaud demonstrates. Fashions of this kind flowed from the French court, and Louis XIV liked wearing them—as did the Duc de Saint-Simon, among others. However, it is difficult to trace where the initial idea took hold. According to Jennifer M. Jones (Sexing La Mode: Gender, Fashion and Commercial Culture in Old Regime France, 2004) and Joan DeJean (The Essence of Style, 2006, pp. 91–92), there is genuine disagreement among scholars of costume as to whether scarlet heels made their first walk-on appearance in sixteenth-century Venice, seventeenth-century England, or Sweden. Lucy Pratt, Curator in the Textiles and Dress Department at the Victoria and Albert Museum in London points out that red soles and heels became popular at the court of Louis XIII in the 1630s, and were imported from Versailles to England by Charles II in 1660—the King is shown wearing them in John Michael Wright’s coronation portrait. However, as early as 1614 there is a red heel clearly visible in the funerary monument to Sir John and Lady Doddridge in Exeter Cathedral. Certainly by the first quarter of the eighteenth century this fetching habit had jumped the boundaries imposed by conventions of court attire, and in Mist’s Journal of 1727 we find fashionable young men wearing red heels around town. We find them again, this time worn by a drunk, in William Hogarth’s Marriage a la Mode (1743). And in 1771 a correspondent inquired of the London Magazine “whether your London ladies, like your London gentlemen, intend to wear red heels to their shoes.”
Posted by Angus Trumble at 3:49 PM