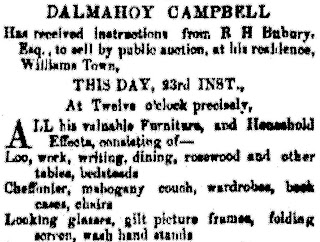 I have been searching for information about picture frames and evidence of frame-making in colonial Melbourne up to the early 1850s. There is a good reason for this. It has to do with my work on Thomas Woolner. My preliminary conclusions are mixed. Before the earliest stages of the Gold Rush and during the first and second years (1851/52/53), it would seem that most if not all gilded picture frames, or any others for that matter, were brought to Melbourne from England, and circulated thereafter as a consequence of auction sales of personal property and chattels. We shall turn to an especially interesting one of those presently.

By the early southern autumn of 1855, however, there is irrefutable evidence of local manufacturing. Two advertisements placed in the Argus newspaper in Melbourne prove this. The first (Wednesday, March 7, 1855, page 8) reads:

PRINT Frame Makers,―The subscriber begs to direct the attention of the trade to his stock of Chance’s Patent Plate and Flatted Sheet Glass, Henry Brooks, 13 Stephen-street, between Flinders-street and Flinders-lane.

Obviously Mr. Brooks presumed that a picture-framing “trade” in Melbourne was sufficiently established and/or competitive to justify advertising his stock of high-quality glass from Chance Brothers of Smethwick in Staffordshire―they “did” the Crystal Palace―just as Yorke and Norton had reason to believe that it was worth their while to advertise for a frame maker and gilder. The availability of gold was, of course, the least of their concerns. It seems likely that in 1855 they, like everyone else, were suffering from the universal dearth of labor arising from the mass desertion of employees headed for the diggings, but the larger point is that the dizzying growth of the colony between 1851 and 1855 attracted not just people but businesses too, among them picture frame-makers and gilders.

Printed announcements of auction sales such as the following, meanwhile, shine rays of penetrating light into every corner of otherwise scantily documented colonial interiors. We know nothing of the circumstances that led to this fire sale, but it seems likely that the Vandiemonian Mr. R. H. Burbury was one of the many children of Thomas Burbury (?1809–1870), “a cottage-industry weaver who was sentenced to death at the Warwick Assizes for having taken part in burning down Beck’s steam factory at Coventry, where the weavers had been threatened with unemployment through the installation of new machinery.” According to the Australian Dictionary of Biography, “this was one of the last recorded examples of industrial ‘Luddism’ in England. On the intercession of Edward Ellice, M.P. for Coventry, the sentence was commuted to transportation for life. Mr. Burbury arrived in Hobart Town in the York on 29 December 1832. His gaol and hulk reports gave him a good character and ‘respectable connexions,’ and the surgeon-superintendent’s report described his conduct on the voyage as ‘excellent’... He was granted a ticket-of-leave in December 1837 and a free pardon on 30 October 1839, also receiving local testimonials to his character, and pecuniary rewards.” He set up a butcher’s shop and mixed business at Oatlands in Van Diemen’s Land, and his sons eventually established themselves in law and business, evidently not without some disasters along the way.

Thus, the following announcement appeared in the Argus on Monday, February 23, 1852 (page 4):