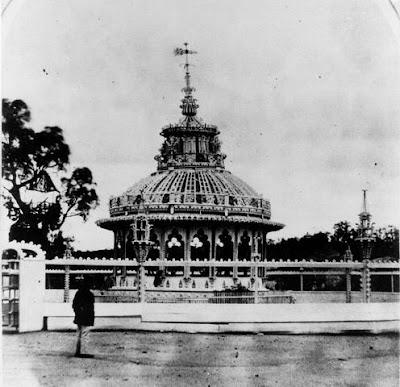 Whilst searching for more particulars about Yorke and Norton, the framers and picture dealers of 87 Collins-street east, who were certainly active by 1855, earlier today I chanced upon the following advertisement for an ambitious midsummer show at Astley’s, the large theater in Spring Street that was tucked behind the old National Hotel in Bourke Street, in other words roughly where the Princess Theatre is today (Argus, Wednesday, February 14, 1855, page 8). I suppose this is a valuable reminder that while picture frames are one thing, show business was an altogether more ambitious affair in colonial Melbourne, with a far longer and arguably more interesting history.


Astley’s
Sole Lessee and Manager, Mr. G. Lewis.
Treasurer, Mr. H. Birch.
Conductor of the Circle and Ring Master,
Mr. T. Nunn.
Astounding Success of the magnificent Legendary
Spectacle of
St. George and the Dragon.
Never was success more decided, encouragement more deserved, or the Manager of a Circus more cause [sic] to be grateful.
Crowded houses night after night
Are the best criterion of all popular entertainments; and it is with the greatest pride, the Proprietor asserts, that he has been singularly fortunate in the production of such entertainments as are adapted to the public taste. For the great support he is nightly receiving, he begs leave most respectfully to thank his kind patrons, and to assure them that every novelty that capital and taste can command, shall, during the season, be brought forward for their amusement.
Wednesday, Thursday, and Friday, February 14th,
15th, and 16th [1855].
Previous to the Performance, a Grand Overture
will be performed by the Band.
Synopsis of the performances:
Terrific encounter of
St. George and the Monster Dragon!
The entertainments will conclude with, first time
this season, the grand legendary spectacle of
St. George and the dragon,
or,
The Seven [sic] Champions of Christendom.
Supernaturals:
Kalaba, the Enchantress, Mrs. T. Lee.
Sycorax, a Fiend, doomed to perpetual torments
for conspiring with other fiends to free St. George,
Master J. Christoff.
The movements of the dragon performed by
Mr. H. Walker.
Mortals:
St. George, Mr. Barlow; Tom of Coventry, a Tinker, afterwards Squire to St. George, Mr. Yeamans; Kate, Mrs. Yeamans; Dame, Mrs. T. Lee.
The Six Champions:
St. Denis of France, Mr. G. Nunn; St. Patrick of Hibernia, Mr. Klaer; St. James of Spain, Mr. H. Walker; St. Anthony of Italy, Mr. Pablo Fanque; St. David of Wales, Mr. Lee; St. Andrew of Scotland, Mr. Smith;
Cavaliers of Coventry, &c., by the company.
Egyptians:
Ptolemy, King of Egypt, Mr. H. Birch; Almandar, King of Morocco, Mr. T. Nunn; Lampthos, a herdsman, Mr. Adams; Princess Sobra of Egypt, Mrs. T. Lee.
Mr. Pablo Fanque, the Eminent Artistic
Rope Dancer!
Florist’s Daughter, Mrs. Yeamans.
French Vaulting by the whole Company.
That Constellation of the Hippo-dramatic Hemi-
sphere, Mr. W. Barlow, will execute on a
Flying Charger his Scenic Act, called
Rinaldo Rinaldini, the Bandit Chief;
Or, The Scourge of Italy.
The Renowned Slack Rope Vaulter, Mr. H. Walker,
will appear as
The Star spangled Sprite of Flying Mercury.
Mr. Klaer as the Bottle Imp.
Comic act of equestrianism by Mr. T. Lee, entitled
The Clown and his Granny!
Mademoiselle Antoinette.
Messrs. Dhering and Stebbing’s Gymnic Feats as
The French Dromios.
Mr. J. L. Smith, the great Trick Act Rider, in his
surprising Equestrian Feats on a Single Horse
at full speed, as
The Bounder of the Rialto…
Persons of improper character will be strictly excluded from the Dress Circle and Side Boxes.

Though this kind of variety program was not especially unusual, on the whole theatrical copy running sometimes on consecutive days in the columns of the Argus was usually a little tighter. Astley’s notice, for example, was immediately followed by the following:

CREMORNE GARDENS.
Cattle show this day.
Madame dalle Case’s
Extraordinary and Terrific Ascent, on the illumi-
nated rope, 400 feet in length, across the
Cremorne Lake,
Every Evening.
Entire change of performance every evening.
Vocal and Instrumental Concert.
Equestrian Circus.
Major John Downey, jun.,
And his auxiliary troupe of talented Apes.
Pony Races with Monkey Jockies.
Music and Dancing as in the Old Cremorne;
A new Hungarian Band.
All the World’s Curriculum
Will run, as usual, every quarter of an hour.
Shooting gallery, Chinese skittles, &c.

I am not quite sure what “All the World’s Curriculum” was, but it was clearly a favorite with Cremorne-goers. Perhaps it was some sort of panorama. It had been running since early January when, in addition, “the sagacious Elephant” performed as usual.

Posted by Angus Trumble at 3:05 PM