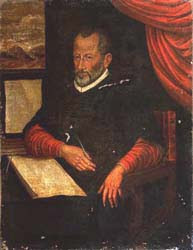 For me one of the profoundest moments of the liturgical calendar, and certainly of Holy Week, is the chanting on Good Friday, today, of the Improperia, or Reproaches, in the setting composed by Tomás Luis de Victoria. The Reproaches, a series of antiphons and responses, come from the Roman liturgy for Good Friday and form a somber background for the Veneration of the Cross, full of pathos, dignity, and grandeur. The verses, twelve in number, were conceived as having been uttered by the crucified Saviour, and, as Jon Dixon once observed, “contrast Divine compassion…with the sufferings inflicted on Christ during his Passion.” I suppose it is hardly surprising that this ancient rite has at different times been twisted into an especially damaging anti-Semitic framework, but, in essence, the Improperia are addressed to everyone, each and all—just as the reproaches themselves fully extend across oceans of human weakness, from the purely personal to the corporate, collective, and global. These are important words to hear, and upon which humbly to reflect.

As far as we can tell, the Improperia first appeared in a document known as the Pontificale of Prudentius (Bishop of Troyes, 846–861) and gradually came into use throughout Europe in the eleventh and twelfth centuries. After this suitably long and typically cautious period of “research and development,” finally in the fourteenth century the Improperia were incorporated into the Roman Ordo. True, the Catholic Encyclopedia rather sniffily noted that they are nowhere to be found in the old Roman Ordines, while Louis Duchesne thought he could detect a Gallican ring to them, in other words a faint echo of pre-Gregorian Roman rites as practiced from the fifth to the ninth centuries in Frankish lands (the loose-knit remnant of Roman Gaul). I love this old form of purely stylistic detective-work, which is based on a vast accumulation of knowledge that, in turn, equips the scholar with the ability to form certain deeply informed hypotheses about where certain phrases truly originated. Yet the survival in the text of the Greek Trisagion (literally “Thrice Holy,” the Agios O Theos) certainly proves that the Improperia had found a place in the Roman Good Friday liturgy before the Photian schism of the ninth century.

Forming part of his sumptuous volume of music for Holy Week, the Officium Hebdomadae Sanctae, which was published in Rome in 1585 by Alessandro Gardane, the Counter-Reformation Spaniard Victoria assembled the text into a deceptively simple, four-part setting of two refrains of really astonishing beauty, a brilliant fusion of homophony with the comparatively daring melodic lines for which he became famous, and ultimately led twentieth-century scholars of sacred music to resuscitate his work, and perform it widely again.