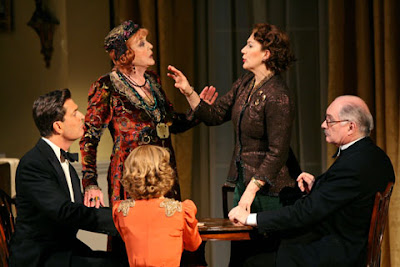 I have been consulting the memoirs of the late Princess Alice, Duchess of Gloucester, which contains among much else a lively account of the period 1945 and 1947 when Prince Henry, the Duke, served as Governor-General of the Commonwealth of Australia. I was especially tickled to discover the following stray reference to Noël Coward’s play Blithe Spirit (1941), revived on Broadway a few years ago with Angela Lansbury in the role of Madame Arcati, and also to Rear Admiral Sir Leighton Seymour Bracegirdle, K.C.V.O., C.M.G., D.S.O., who was Military and Official Secretary to successive Governors-General from 1931 to 1947:

The holiday over, we returned to Canberra, where at the end of February I report [to Queen Mary] that we have seen “a very amusing coloured film—Blithe Spirit by Noël Coward [1945]. It was shown in aid for “Food for Britain.” The name “Captain Bracegirdle” comes into it, and caused merriment all round. Apparently Noël Coward was staying here [in 1940] while writing the play, and was so taken with the name that he asked if he might use it. We did not know of this beforehand so were completely taken by surprise” [p. 151].

In the third act, Charles Condomine, suffering the ill effects of being haunted by the ghosts of two deceased wives, has an especially sharp exchange with his first, Elvira, about the unsatisfactory honeymoon they spent at Budleigh Salterton, complaining in particular about certain illicit expeditions in a punt with Guy Henderson, and long walks over the moors in the company of a certain Captain Bracegirdle.

There are now two possibilities as to whom Rear Admiral Sir Brian Murray once had in mind (or not) when at Government House, Melbourne, he presented to the Duke of Norfolk his honorary naval aide-de-camp, Warwick Teasdale, as “Captain Bracegirdle” instead—either (1) Commander Warwick (“Braces”) Bracegirdle, D.S.C., R.A.N., which is my reader Rick Cazaly’s quite logical suggestion, or else, more intriguingly perhaps, (2) Sir Leighton Bracegirdle of Yarralumla. Sir Brian, who, I believe, entered the Royal Australian Navy in 1939, would surely have been aware of the identity of both distinguished officers, however it seems unlikely that we shall ever know which one caused his momentary confusion when making presentations to the Earl Marshal of England, or, indeed, if Noël Coward’s Blithe Spirit played any part. I rather doubt it.
Posted by Angus Trumble at 1:28 PM