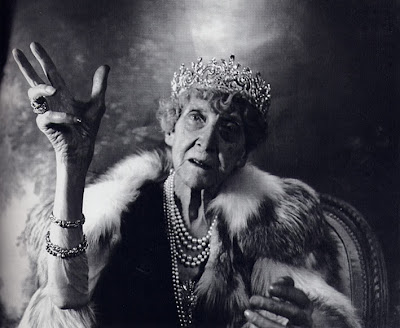 Between 1859 and 1891 her four sons and four of her five daughters produced for Queen Victoria no fewer than forty grandchildren. Of these six died in early childhood, and a further four died comparatively young. Of the surviving thirty, twenty-one were princesses and no fewer than six of these were christened Victoria. Princess Marie Louise (Louie), and her elder sister Princess Helena Victoria (Thora), were the daughters of Queen Victoria’s slightly difficult third daughter and fifth child Princess Helena and her husband Prince Christian of Schleswig-Holstein-Sonderburg-Augustenberg, and were born in 1872 and 1870 respectively. This places them right in the middle of the sequence of granddaughters, in the tenth and eleventh spots. Their female first cousins fall into four principle categories: German and Russian princesses by birth or marriage who found themselves cut off from their British cousins after the outbreak of World War I and whose official rank evaporated when the Kaiser abdicated in 1918; British and German princesses who went on to become crown princesses or queens consort and empresses of other European countries—namely of Greece, Norway, Rumania, Spain, Sweden, and Russia; British princesses who remained British, but whose public role gradually diminished in prominence and importance following the accession of King Edward VII, and the following three generations: King George V (1910), King George VI (1936), and the present Queen Elizabeth (1952); and, finally, those few who, through marriage, spent long periods in vice-regal service abroad, invariably in Canada and South Africa.
Louie is interesting because although she evolved through several of the lesser of these categories, she did not fit comfortably or permanently into any of them. Her early marriage to Prince Aribert of Anhalt was the bright idea of Cousin Willie—but was perhaps more accurately an outstanding example of the Kaiser’s astounding lack of judgment. The marriage was dissolved in 1900, almost certainly because the prince was caught in flagrante with a young male servant. Thenceforth Louie’s status was somewhat problematic. She regarded her marriage vows as permanently binding, and never considered remarriage. She returned to the household of her parents, and, in 1917, when, bowing to immense public pressure, King George V converted those German titles held by members of the extended royal family to English ones, Louie became known, somewhat ambiguously, as Her Highness Princess Marie Louise. In the 1920s and 1930s Louie spent long periods traveling abroad, inviting herself to stay for several high-maintenance months at a time in Government Houses all over the Empire, or else in the palaces of her crowned cousins. In between, Louie interested herself in various charities, girls’ clubs, nursing homes, and other worthy causes, mostly those established and sustained for decades by her mother Princess Helena. Louie lived comfortably with her sister Thora and a succession of long-suffering ladies-in-waiting for whom the arduousness of these honorary appointments was not necessarily rewarded by close proximity to court; indeed the rate of attrition appears to have been quite high. Nevertheless as an increasingly eccentric old lady, the families of George V and George VI kept an affectionate eye on Louie and Thora, and evidently enjoyed their company. Most importantly in the present context, not unlike her aunt Princess Louise, Duchess of Argyll, Louie gravitated towards artists and designers and musicians and writers. It was partly through her intervention that the young Cecil Beaton gained access to the royal circle, and for two solid years between 1921 and 1923 practically all of Louie’s time was spent organizing and mustering the increasingly granular contributions to Queen Mary’s Doll’s House.
Posted by Angus Trumble at 2:28 PM