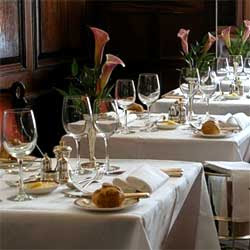 Some months ago I was having dinner alone in my London hotel. There were a few other solo diners that evening, who, like me, were obviously traveling on business. In that perfect English way we were keeping ourselves to ourselves, despite the sort of proximity that can so often here in America give rise to spontaneous and friendly chat between strangers. Each mode may be delightful in its context, but in England I find keeping oneself strictly to oneself feels right.

However, there was also a couple in the dining room that evening, in comfortable possession of early middle age—he had on a dark suit and tie, and she wore a slightly racy dark blue cocktail dress, draped, with sequins at the bosom, which was generous. Their conversation was hushed, no more than a murmur, but there came a point when, rising above the demure clinking of several other pairs of knives and forks, the sound of occasional pouring, the discreet shuffle of an apron-wearing waiter, and all the other soothing background noises of a peaceful London dining room, the lady’s voice became distinctly audible, and a single sentence floated out, fully rounded, slightly pained, mildly exasperated, but also matter-of-fact, as if the contents had to be spelled out for the benefit of one who had thus far been pretty slow on the uptake.

“Look,” she said, “you’re not the one in a witness protection program.”

Just like that: a single sentence, but what a sentence! It seemed in so many ways, Runyon-like, to hoist a wonderfully provocative question mark, challenging the rest of us to respond. For a fraction of a second my eyes met those of the unaccompanied lady diner opposite, a senior copy editor of scientific textbooks I guessed. In that moment I suspect that what passed through both our minds was that each of us was sitting squarely between the easily accessible ground floor window looking in from the bleak, wet, ill-lit pavement of George Street and the table occupied by the couple, which just then struck one as almost as far from the window as it was possible to sit, such that a rain of retributive automatic gunfire would certainly take us out before it took out them.

Yet, still reclining somewhat restively in a cocoon of English privacy, one’s thoughts raced onward. Surely it is axiomatic that those temporarily or indeed permanently consigned to witness protection programs are firmly discouraged from broadcasting the fact. More, what ghastly crimes might the lady have witnessed, she whose spangly sequins also suggested that whatever stresses and strains such a serious situation might impose, she was nevertheless bearing up pretty well under the burden of it? Three hearty courses and a decent bottle of Côtes du Rhône, I noticed.

Did it have something to do with Russian oligarchs? The Mexican drug trade? Could it be investment banking irregularities, or money-laundering? This last because a few seconds later, I caught the unaccompanied gentleman with the newspaper diagonally opposite, a semi-retired stockbroker—no doubt about it—stealing a self-disciplined but hawkish glance (shrewd in its careful focus) towards our fugitive couple, but he straightaway caught me catching him, and swiftly resumed his study of the financial pages. I, too, cast my eyes downward, very Barbara Pym, feeling somehow as if I had wandered into the poor man’s lavatory. Thenceforth I concentrated on finishing the rest of my dinner.

This, I reflected over coffee, having noted a few intermittent gusts of reassuring laughter emanating from the sequined lady, was a London vignette of exquisitely novelistic potential—though alas I am not yet a novelist.
Posted by Angus Trumble at 8:37 AM