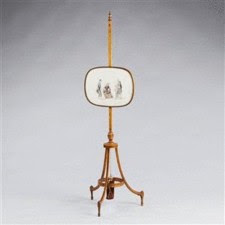 Lately I received a courteous message from a gentleman who recalled having been shown over the state rooms of Government House, Melbourne, by me when I worked as an aide to Governor McCaughey nearly twenty-five years ago. Clearly that tour must have been memorable, and I can only hope that it was memorable for the right reasons. He went on to explain that I had shown him on that occasion an object near one of the fireplaces which he thought I said was for the lady of the house to busy herself behind with tapestry or needlework, while not revealing too much of her face in wider company. Did I recall the object and its name? He explained that the reason he sought clarification was that he is writing an historical novel that is set in 1910.

I well remember the pair of objects to which he refers. They stand at either side of the fireplace in the State Drawing Room, and my correspondent was right in thinking that adjustable firescreens of this kind had to do with the fire in the grate. However, the function of the object was not provide something discreetly to hide behind, but rather to shield a lady’s face from the radiant heat of the fire, so as to avoid unsightly flushing, blushing, or worse. The practice of creating adjustable, embroidered panels with which to decorate such firescreens—here is a rather ugly mid-Victorian one, ornate in a rather cheap way— was a semi-logical convergence of function and pastime. In other words, the embroidery that ladies so positioned (and protected) industriously practiced while sitting by the fire, “flush-free,” was eventually coralled into decorating the screen itself, a depressing example, I suppose, of the pointlessness and circularity of much that went on in the day-to-day life of a Victorian lady, or, as it were, didn’t. Unless, of course, you were George Eliot, Lady Burdett-Coutts, or Mrs. Russell Barrington.
Posted by Angus Trumble at 8:57 AM