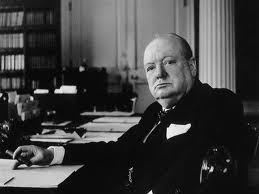 The events unfolding in Europe in recent days, indeed the lack of geopolitical focus exhibited by the entire community of nations in the midst of the current economic crisis, brings into focus a horrible truth: As far as creativity and boldness of leadership are concerned, we are adrift in a sea of ordinariness.

Where is the vision? Where is the grit and determination to put the shamefully expedient western financial system in order; to deal forthrightly with excessive, squalid wealth that treads with contempt and utter selfishness upon grinding poverty; to forge a more adequately representative international settlement which accommodates the great states such as Russia, China, India, and Indonesia? Where is the gravity that looks far beyond opinion polls and even election results; and, perhaps above all, where is the proper disregard for the shallow cult of celebrity that practically everywhere now so deeply undermines public life, discourse, and deeds?

When the democratically-elected representatives of the American people find themselves in a crisis simply unable even modestly to raise the level of taxation on the incomes of the wealthiest few in order to confront and alleviate the enormous problems faced by the entire polity, you have to ask: How did this happen, and where has our common sense gone, to say nothing of our basic senses of justice, of goodness, and of truth?

All this puts me in mind, first, of Kenneth Clark’s famous rhetorical flourish: “What is civilization? I don’t know. I can’t define it in abstract terms, yet. But I think I can recognize it when I see it, and I’m looking at it now,” and, following his prompt, and that of Jacob Bronowski here, a single speech delivered in the House of Commons on November 12, 1940. Only 71 years separate us from that moment, but from where I sit it might almost be centuries. Here is what Winston Churchill said then about Neville Chamberlain:

“Since we last met, the House has suffered a very grievous loss in the death of one of its most distinguished Members, and of a statesman and public servant who, during the best part of three memorable years, was first Minister of the Crown.

“The fierce and bitter controversies which hung around him in recent times were hushed by the news of his illness, and are silenced by his death. In paying a tribute of respect and of regard to an eminent man who has been taken from us, no-one is obliged to alter the opinions which he has formed or expressed upon issues which have become a part of history; but at the Lychgate we may all pass our own conduct and our own judgments under a searching review. It is not given to human beings, happily for them, for otherwise life would be intolerable, to foresee or to predict to any large extent the unfolding course of events. In one phase men seem to have been right, in another they seem to have been wrong. Then again, a few years later, when the perspective of time has lengthened, all stands in a different setting. There is a new proportion. There is another scale of values. History with its flickering lamp stumbles along the trail of the past, trying to reconstruct its scenes, to revive its echoes, and kindle with pale gleams the passion of former days. What is the worth of all this? The only guide to a man is his conscience; the only shield to his memory is the rectitude and sincerity of his actions. It is very imprudent to walk through life without this shield, because we are so often mocked by the failure of our hopes and the upsetting of our calculations; but with this shield, however the fates may play, we march always in the ranks of honour.

“It fell to Neville Chamberlain in one of the supreme crises of the world to be contradicted by events, to be disappointed in his hopes, and to be deceived and cheated by a wicked man. But what were these hopes in which he was disappointed? What were these wishes in which he was frustrated? What was that faith that was abused? They were surely among the most noble and benevolent instincts of the human heart—the love of peace, the toil for peace, the strife for peace, the pursuit of peace, even at great peril, and certainly to the utter disdain of popularity or clamour. Whatever else history may or may not say about these terrible, tremendous years, we can be sure that Neville Chamberlain acted with perfect sincerity according to his lights and strove to the utmost of his capacity and authority, which were powerful, to save the world from the awful, devastating struggle in which we are now engaged. This alone will stand him in good stead as far as what is called the verdict of history is concerned.

“But it is also a help to our country and to our whole Empire, and to our decent faithful way of living that, however long the struggle may last, or however dark may be the clouds which overhang our path, no future generation of English-speaking folks—for that is the tribunal to which we appeal—will doubt that, even at a great cost to ourselves in technical preparation, we were guiltless of the bloodshed, terror and misery which have engulfed so many lands and peoples, and yet seek new victims still. Herr Hitler protests with frantic words and gestures that he has only desired peace. What do these ravings and outpourings count before the silence of Neville Chamberlain’s tomb? Long, hard, and hazardous years lie before us, but at least we entered upon them united and with clean hearts.

“I do not propose to give an appreciation of Neville Chamberlain’s life and character, but there were certain qualities always admired in these Islands which he possessed in an altogether exceptional degree. He had a physical and moral toughness of fibre which enabled him all through his varied career to endure misfortune and disappointment without being unduly discouraged or wearied. He had a precision of mind and an aptitude for business which raised him far above the ordinary levels of our generation. He had a firmness of spirit which was not often elated by success, seldom downcast by failure, and never swayed by panic. When, contrary to all his hopes, beliefs and exertions, the war came upon him, and when, as he himself said, all that he had worked for was shattered, there was no man more resolved to pursue the unsought quarrel to the death. The same qualities which made him one of the last to enter the war, made him one of the last who would quit it before the full victory of a righteous cause was won.

“I had the singular experience of passing in a day from being one of his most prominent opponents and critics to being one of his principal lieutenants, and on another day of passing from serving under him to become the head of a Government of which, with perfect loyalty, he was content to be a member. Such relationships are unusual in our public life. I have before told the House how on the morrow of the Debate which in the early days of May challenged his position, he declared to me and a few other friends that only a National Government could face the storm about to break upon us, and that if he were an obstacle to the formation of such a Government, he would instantly retire. Thereafter, he acted with that singleness of purpose and simplicity of conduct which at all times, and especially in great times, ought to be the ideal of us all.

“When he returned to duty a few weeks after a most severe operation, the bombardment of London and of the seat of Government had begun. I was a witness during that fortnight of his fortitude under the most grievous and painful bodily afflictions, and I can testify that, although physically only the wreck of a man, his nerve was unshaken and his remarkable mental faculties unimpaired.

“After he left the Government he refused all honours. He would die like his father, plain Mr. Chamberlain. I sought permission of the King, however, to have him supplied with the Cabinet papers, and until a few days of his death he followed our affairs with keenness, interest and tenacity. He met the approach of death with a steady eye. If he grieved at all, it was that he could not be a spectator of our victory; but I think he died with the comfort of knowing that his country had, at least, turned the corner.

“At this time our thoughts must pass to the gracious and charming lady who shared his days of triumph and adversity with a courage and quality the equal of his own. He was, like his father and his brother Austen before him, a famous Member of the House of Commons, and we here assembled this morning, Members of all parties, without a single exception, feel that we do ourselves and our country honour in saluting the memory of one whom Disraeli would have called an ‘English worthy.’”

So, there we are. We will not, and evidently we cannot, produce another Churchill any more than we will discover in our midst a Franklin Delano Roosevelt, more’s the pity, but surely there has never been a time between then and now when the need for that calibre of brave and decisive leadership; wisdom and strength; goodness of heart, and passion was ever greater, or more urgent.