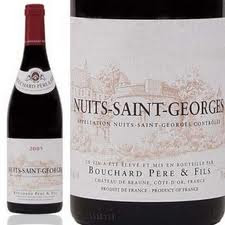 Curious, isn’t it, how little threads join wildly different moments? A few weeks ago I was in the dining car of the Blue Train, somewhere not far from Beaufort West in South Africa, jotting down with deep skepticism the brief but extravagant description of Klein Constantia printed in the wine list. Back in New Haven, this led me to Jane Austen, Charles Dickens, Napoleon and creepy old Baudelaire, who in the Fleurs du mal reckoned he preferred the elixir of his lover’s mouth over opium, or the fine vintages of Nuits St. Georges, and Constantia. I bet he was fibbing about the opium. Anyway, I now know that the vin de Constance that flourished before phylloxera was everything it was cracked up to be, but how delightful, only a few days later, to bump into Nuits St. Georges again, this time in London, and as a prop exquisitely chosen by Barbara Pym in Excellent Women:

I sat patiently while William and the waiter consulted in angry whispers. A bottle of wine was brought. William took it up and studied the label suspiciously. I watched apprehensively as he tasted it, for he was one of those men to whom the formality really meant something and he was quite likely to send the bottle back and demand another. But as he tasted, he relaxed. It was all right, or perhaps not that, but it would do.

“A tolerable wine, Mildred,” he said. “unpretentious, but I think you will like it.”

“Unpretentious, just like me,” I said stupidly, touching the feather in my brown hat.

“We really should have a tolerable wine today. Spring seems to be almost with us,” he observed in a dry tone.

“Nuits St. Georges,” I read from the label. “How exciting that sounds! Does it mean the Nights of St. George? It conjures up the most wonderful pictures, armour and white horses and dragons, flames too, perhaps a great procession by torchlight.”

He looked at me doubtfully for a moment and then, seeing that I had not yet tasted my wine, began to explain that Nuits St. Georges was a place where there were vineyards, but that not every bottle bearing the name on the label was to be taken as being of the first quality. “It might,” he said seriously, “be an ordinaire. Always remember that. A little learning is a dangerous thing, Mildred.”

“Drink deep, or taste not the Pierian spring,” I went on, pleased at being able to finish the quotation. “But I’m afraid I shall never have the chance to drink deep so I must remain ignorant.”

“Ah, Pope at Twickenham,” sighed William. “And now Popesgrove is a telephone exchange. It makes one feel very sad.” He paused for a moment and then began to eat with great enjoyment.


I gather that vintages of Nuits St. Georges are produced in the part of Burgundy called, not surprisingly, Côte de Nuits. I’m not sure I have ever tasted one, not even an ordinaire. Also, I had to go and look up the couplet from Pope. It comes from Part II of An Essay on Criticism (1711), which goes to show you how very safe I am, rather like Mildred. Notice, though, the brilliance of Barbara Pym’s comic prose: those angry whispers, the feather, the endearing recklessness of Mildred’s effort to generate conversational momentum and the banality of William’s effortless and entirely unwarranted condescension, above all the telephone exchange. Most satisfactorily near the end of the novel Mildred seizes the chance to lob Nuits St. Georges right back into William’s court, after the manner of Dorothy Round Little. Lovely, and now I must take out the rubbish.

Posted by Angus Trumble at 7:08 AM