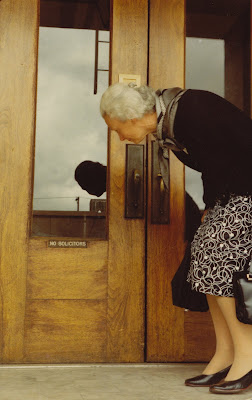 I’ve been looking through the albums. How very lucky we are to have them.

Whenever they traveled to the United States of America, which was not often, Dad rarely lost an opportunity to have himself and/or Mum (as in this instance) photographed inspecting those little signs on the front door of Upper East Side apartment and other buildings that say “NO SOLICITORS.”

Dad was a solicitor, but not the kind that bother us here. In the British legal system from which the Australian was derived, solicitors were attorneys who dealt with any legal matter, including certain minor court proceedings. However, by universal convention solicitors engaged learned barristers to argue their clients’ cases in the higher courts, and until recently defendants or litigants had no choice but to consult a solicitor in the first instance. It was very much a two-tiered system: suave barristers above, and humble city solicitors below. Indeed before the First World War it was not unusual for Australian solicitors not to have a law degree; barristers invariably did. When our grandfather was admitted to practice in the Supreme Court of Victoria, the law in Australia was in the process of rapidly professionalizing. Thenceforth solicitors invariably took law degrees before being articled to a senior solicitor. They then had the option of reading for the bar (to become a barrister), or not. Judges were almost invariably chosen from the pool of senior barristers. Dad graduated from the University of Melbourne on December 18, 1948, was shortly afterwards admitted to practice as a solicitor, and did so for the rest of his professional life.

In America, the sign “NO SOLICITORS” is meant to ward off door-to-door salesmen, hawkers, canvassers, etc., but Dad and Mum were always tickled by the notion that this could be read as an outrageous rebuke aimed at respectable partners of the old Melbourne firm of Mallesons. God, how I miss them both!