The name of Hurricane Irene 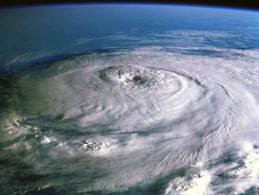 According to the World Meteorological Organization, the United Nations agency responsible for studying the state and behavior of the Earth’s atmosphere, its interaction with the oceans, the climate these produce, and the resulting distribution of fresh water, “there is a strict procedure to determine a list of tropical cyclone names in an ocean basin by the responsible Tropical Cyclone Regional Body at its annual or biennial meeting.” There are five such tropical cyclone regional bodies, of which the fourth, that of North America, Central America, and the Caribbean concerns us here. From 1953 to 1979 Atlantic tropical storms were named consecutively from lists of twenty-one women’s Christian or first names arranged alphabetically (except for the letters Q, U, X, Y, and Z) on a six-year rotation. In 1979, it was decided to add men’s names to these lists, alternating with women’s, and, should the number of tropical storms ever exceed twenty-one, to continue thereafter with the names for letters of the Greek alphabet, that is, alpha, beta, gamma, delta, etc. From these lists certain names are occasionally removed for reasons of sensitivity when they stand post hoc for a storm that caused much loss of life or destruction. “It is important to note,” they say, “that tropical cyclones or hurricanes are named neither after any particular person, nor with any preference in alphabetical sequence,” whatever that means. Such names are said to be familiar to whole populations in each region, for the purposes of comprehensibility, clarity, memorability, and, in turn, better preparedness, and improved public safety. So where I sit just now, in New Haven, Conn., Hurricane Irene—Irene of the Horai, she of order, loveliness, spring flowers, cornucopias, predictability and, above all, peace—is instead charging up the eastern seaboard of the United States like a mad, bile-spitting harpy, causing immense upheaval, chaos, disruption, fear, and destruction. Moreover, and most curiously, she is to be found in the following bizarre sequence of names that were apparently selected on purpose, but according to no identifiable principle of taste, by invisible meteorologists who claim to know which names are most memorable to a majority of people in our multilingual, multicultural, multinational region. It is simply mystifying, but I suppose it could just as easily have been Arlene, Bret, Cindy, Don, Emily, Franklin, Gert, Harvey, Jose, Katia, Lee, Maria, Nate, Ophelia, Philippe, Rina, Sean, Tammy, Vince, Whitney, alpha, beta, gamma, delta, etc. So let us be gay.

Posted by Angus Trumble at 3:47 PM