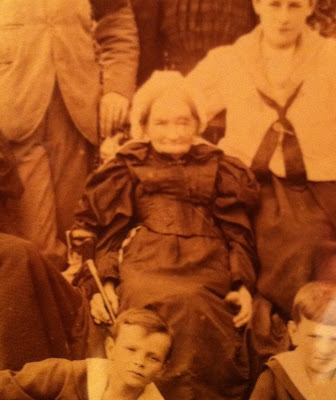 In great old age, our three times great-grandmother Catherine Anne Wallen, a member of the club of thirty-two, lived in quiet retirement with her eldest son, Robert Elias Wallen and his family at Harlech, their large house in Hawthorn. There, in a minuscule, spidery hand, she wrote a brief but meandering memoir of her childhood that carries us all the way to the West Indies right in the middle of the Napoleonic Wars, and to Regency London. Old Mrs. Wallen was the daughter of Charles Gibbons Hobson, of Dominica, and Anne, the daughter of a M. Audibert, who, according to Aunt Jean, fled with his people to their estates in the West Indies during the French Revolution. Inevitably, perhaps, what she wrote must have conflated certain recollections of her parents, siblings, cousins, and friends also, especially the unusual circumstances in which she was born. The frequent repetitions, circular double-back chronology, and recurring points of emphasis are probably due to stopping and starting as the domestic routine at Harlech dictated, and sheer forgetfulness. However, hers is a charming first-hand account of life as the Atlantic-commuting daughter of a reasonably well-to-do planter in the decade following Emancipation:

Posted by Angus Trumble at 6:37 AM