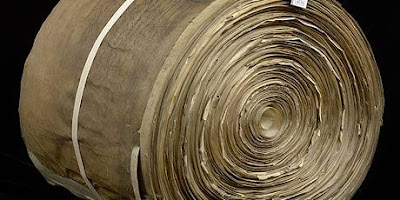 Another chance encounter in London last week: a beautifully spare publication of 150 rare documents spanning the last six centuries, each carefully selected to commemorate the sesquicentenary of the Victoria Tower in the Palace of Westminster, Charles Barry’s facility for housing in perpetuity the parliamentary archives, in so many ways the greatest loss in the fire of 1834. The tower was completed in May 1860, and was at first, as Claude Monet demonstrated fifty years later, the dominant symbol of Westminster, long before the slenderer bell tower came to replace it as a shorthand symbol of London, much bolstered by the chimes of Big Ben broadcast by the BBC in wartime.

Victoria Tower Treasures from the Parliamentary Archives, by Caroline Shenton, David Prior, and Mari Takayanagi (House of Lords, 2010) is much more than a souvenir, or a digest of the greatest archival hits of the British Houses of Parliament. It deftly explores the meaning of ancient documents; the purposes of their preservation, and their role as the very receptacles of key moments in the history of parliamentary government.

The earliest, an act for taking apprentices to make Worsteds (12 Henry VII, c. 1, 1497) is astonishingly legible, and was the Tudor equivalent of an economic stimulus package for the wool industry of Norfolk. The most recent is the Freedom of Information Act 2000, which came into effect on January 1, 2005. In between there is a wealth of intelligently chosen manuscripts and printed documents, ranging from gigantic, defining constitutional matters to brief, apparently trivial, but powerfully evocative ephemera, and everything in between.

On January 24, 1581, Queen Elizabeth sends a sharp message of rebuke to the Speaker of the House of Commons for having permitted the voting through of an unauthorized day of public fasting, prayer, and preaching for the members. Letters patent incorporating the Company of Beaver Hat and Cap makers are granted on February 19, 1638, liberally decorated around the margin with illuminations of aquatic rodents—a valuable reminder of the persistence and political sensitivity of sumptuary legislation. Charles I requests the House of Lords to show mercy for the Earl of Strafford. Eight years later fifty-nine commissioners sign and seal the King’s death warrant, thereby in most cases preparing the first working draft of their own. Permission to make coffee in the Palace of Westminster is granted to a caterer by the Earl of Lindsey, Lord Great Chamberlain of England, on November 3, 1681. A messy draft Declaration of Rights, dated February 12, 1689, arising from the so-called Glorious Revolution that deposed James II, is on the same day beautifully copied and certified as “engrossed.” Extremely sinister letters, addressed anonymously in November 1690 by persons who might best be described as shivers in search of a spine to run up, warn of a second and entirely fictitious gunpowder plot, shamelessly exploiting the Popish Plot hysteria of 1679. The peers of Scotland feebly sign the Articles of Union on July 22, 1706. An Act for naturalizing three German foreigners, including George Frederick Handel, receives royal assent as 13 George I, c. 2, in 1727. Handel composes his Zadok the Priest for the coronation of George II later that same year. The Duke of Cumberland dashes off a blasé report to the Lord Chancellor concerning the grisly fate of “that unhappy infatuated Multitude” so brutally dealt with at the Battle of Culloden on May 15, 1746. On January 20, 1778, a word-perfect copy of the American Declaration of Independence is laid before a stunned House of Lords. Printed tickets are issued in April 1793 for admission (and re-admission) to the trial of Warren Hastings. Plans of new roads, canals, harbour facilities, and eventually railways, are meticulously gathered, scrutinized, and preserved throughout the Industrial Revolution. Slavery is abolished in 1807. In 1821 the longest piece of legislation in English history is enacted, providing for the appointment of commissioners to collect the land tax. It consists of a huge roll of 757 vellum membranes joined end to end (above), measuring roughly 380 yards long when unravelled. The Dominion of Canada is created in 1867; the Commonwealth of Australia in 1901, and legislative relations with the other dominions partly adjusted and clarified by the Statute of Westminster in 1931. Women aged thirty and older are given the vote in 1918, and the disparity with men aged twenty-one and older finally abolished in 1928. Nancy Astor, the first woman to sit in the House of Commons, takes her seat for Plymouth Sutton in 1919. King Edward VIII abdicates the throne at the end of 1936. Life peerages are created in 1958, and in 1978 evidence of a disastrous oil slick from a North Sea tanker is collected from a beach in Norfolk, deposited in a small plastic bag, and submitted to the House of Commons Select Committee on Science and Technology.

The brief commentaries here are cogent and revealing; the photography exquisite, and you are left with an overarching sense of the longevity of the Mother of Parliaments, its organically intelligent behavior, and of the cautious, incremental but occasionally radical nature of British constitutional and parliamentary reform—that particular genius of the British nation.

In so many cases, as well, the materiality of the document reflects, even captures the essence of its content: the almost pathetic flimsiness of the 1936 typewritten instrument of abdication, for example, and the king’s extraordinarily adolescent signature; the superabundant elegance of the hand of Charles I, even when riffling impatiently through the cipher and occasionally ditching it entirely whilst writing gloomily to Prince Maurice after the Battle of Naseby in 1644; the panic and disorder clearly apparent in the notes hurriedly scribbled in the hours following the assassination of Spencer Percival, the only British prime minister ever to have suffered that fate, so much more shocking because he was shot dead in the lobby of the House of Commons; the creaking, proto-Dickensian complexity of evidence submitted in support of special divorce legislation arising from individual cases of incestuous adultery prior to the passage of the Matrimonial Causes Act of 1857; the preposterous size of that land tax, which was abolished only as recently as 1963. The list goes on. Three cheers for the Parliamentary Archives!

Now, please, an Act to Provide for the Better Adminstration of British Airports and Railways During Snowy Weather.