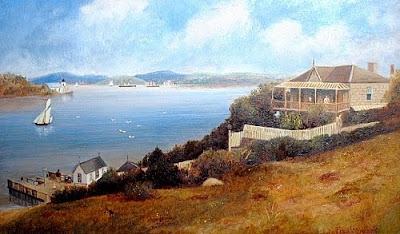 About six months ago I received an email message from a researcher for AustLit, an Australian literary website and database currently affiliated with the University of Queensland, alerting me to the exciting fact that one of our four thankfully unrelated colonial Australian great-grandmothers, Susan Compson Trumble (née Davies) was born on June 25, 1863, in Woodlands Cottage, St. Leonards, on the north shore of Sydney Harbour. Her parents, he wrote, were John Davies, a draper (“of Kiandra House, George Street”), and Jane, the youngest daughter of William Price, of Stroudwater or Rodborough Fort in Gloucestershire. Now, Mr. Davies was Jane Davies’s second husband. The first was Frederic Messiter, B.A., of Malmsbury in Wiltshire, whom she married at Balmain in June 1857. Their son Frederic was born in 1858, and a daughter, Mary, in the following year. According to my correspondent, Mr. Messiter was at one point the honorary secretary of the New South Wales Early Closing Association, and was also active in the Y.M.C.A. Alas, he died suddenly in February 1860. The following year, Mrs. Messiter re-married, to Mr. Davies, who had been one of Mr. Messiter’s employees—a fleck of detail that, you might well argue, hints at raciness, even though Davies was evidently respectable in draping circles, and a little more than ten years older than Jane. John Davies was the son and namesake of John Davies of Leddicott (Shobdon), Herefordshire—which demesne is mentioned in the Domesday Book. Settling at first at Woodlands Cottage, St. Leonards, the Mrs. Davies produced two more daughters, Susan, our great-grandmother, who was born on June 25, 1863, and Mabel (on October 10, 1864). In due course the amalgamated Davies and Messiter families moved to Leddicott in Lavender Bay (above), a property that appears to have consisted of pretty well most of McMahon’s Point, North Sydney. Susan Compson Trumble must have cherished the memory of growing up there, because she and our great-grandfather, J. W. Trumble, applied the name once more to the big house in Church Street, Brighton, where our grandfather and his five older siblings were born and raised.

Intriguingly—and this was the thrust of my correspondent’s principal disclosure—great-great-grandmother Jane Davies, sometime Messiter (née Price) of Leddicott, Lavender Bay, was an ambitious poetess and semi-professional soprano who published under the charming pseudonym “Desda.” The critic of the Sydney Morning Herald went as far as to describe her as “the Australian songstress.” Beautiful though her voice no doubt was, I am afraid her heroic verse is appalling, and the lyric materials roll off the tongue like a brick. Desda’s sources of inspiration include frustrated love in the bush, the “dog nuisance” on Sydney’s north shore (involving losses of poultry), and the malign influence of lassitude and indolence upon small children. For a while in the late 1850s and early 1860s the Sydney Morning Herald, in which her compositions appeared regularly, thirsted for more. However, the exact nature of Desda’s productive, if short-lived association with the composer Ernesto Spagnoletti remains obscure. Maestro Spagnoletti dedicated the printed sheet-music to “Your Willie Has Returned, Dear” (with words by Desda) to “Mrs. Messiter,” perhaps out of discretion, though the text rather recklessly tosses the protagonist into the arms of our heroine, Annie, “holding her to his heart,” and “pressing her lips.” Unfortunately this warmth of timbre gradually makes way for glacial Church of England pieties, however this did nothing to dampen the buoyant cadences of Ernesto Spagnoletti’s fruity, post-Donizettian composition. Desda went on to enjoy comparatively modest success with such gems of colonial bel canto as “Cooey! An Australian Song,” for which Maestro Sagnoletti also wrote the music—which was vanity-published by Mr. Davies himself, a nice tie-in to the draping business at Kiandra House in George Street; “The Relief of the Distressed,” which is all about poverty and why it is best avoided; a scarifying instructional children’s story called The Rival Fairies, and a patriotic song simply entitled “Australia,” which appeared in the Sydney Morning Herald on Wednesday, August 29, 1860. Desda’s last recorded public utterance was more prosaic, and perhaps reflects a measure of withdrawal from public life and the stage. On Tuesday, July 21, 1885, the following advertisement appeared on page 3 of the Sydney Morning Herald: “WANTED, a good plain COOK and Laundress; references. Mrs. Davies, Leddicott, McMahon’s Point, N[orth]. S[ydney].” Desda, a.k.a. great-great-grandmother Jane Price Messiter Davies, died at Leddicott on March 25, 1890, aged fifty-three. Her mortal remains lie buried in St. Thomas’s Cemetery in North Sydney. John Davies died the following year, on August 26, aged sixty-three, and was buried beside her.

Posted by Angus Trumble at 2:45 PM