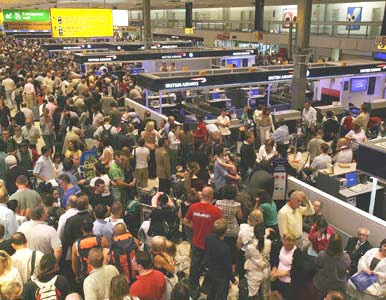 I have just returned to New Haven from a working trip to London. I should have returned a week ago, but I got marooned in what will no doubt be long remembered as the great Heathrow collapse of December 18, 2010. Last Friday and Saturday a considerable amount of snowfall was forecast over southern England. Early in the morning, on December 18, I rang the airline and inquired whether, knowing how unusual any amount of snowfall is in England at this time of year, and also that British Airways had already cancelled all of its flights out of Heathrow that day—whether in view of all this, my Delta Airlines flight to New York (Kennedy), scheduled for later that morning, was also cancelled. Oh no, came the reply: It’s on time. So out to the airport I went, checked my bags, and settled down to wait. The departure board told an increasingly forlorn story as the morning unfolded. A constant and especially uninformative and passive process of incremental lying and postponement gave way to the even more depressing hold-all message of “Please wait.” Meanwhile the snow came: four inches in two hours, not much by North American standards, but by England’s a blizzard of inconceivable disruptiveness. I knew we were in trouble when I looked out of one of the carefully concealed windows at Terminal Four and observed two little old men half-heartedly wielding shovels—not the useful broad plastic sort for snow, but old-fashioned wrought-iron gardening implements, suitable for the transplantation of rhododendrons. Hello, I thought. They’ll be still going in February. I was right. The airport closed, and all flights were put on hold. The initial plan was for the airport to reopen at four o’clock in the afternoon, but that never happened. At about 4.30 p.m., every remaining flight was cancelled—several hundreds, all at once. Throughout the day, no accurate information was made available by the airlines, for the entirely plausible reason that none was made available to them by BAA, a hugely profitable Spanish-owned company that runs Heathrow, along with all the rest of the British airports. At this point, all passengers were funneled back through customs and immigration, then required to retrieve their bags from one of eight provocatively slow and enormously overstretched luggage carousels. There were thousands of us, and no sign of any airline representatives, except for one long-suffering bloke who was, with rapidly deteriorating temper, passing out to a bewildered multitude sheaves of photocopied pieces of paper with the telephone number of Delta Airlines on it—a telephone number that immediately jammed because of the sheer volume of calls from tens of thousands of cell phones, and also a cheerful invitation to log onto the airline’s website. Naturally by this time the server had crashed under the weight of the same number of smart phones. And those were not the only things that crashed in Berkshire by this time: The Piccadilly Line was caput; Heathrow Express was gummed up with too many refugee passengers, the Eurostar services were at first put under extraordinary pressure by smart travelers thinking on their feet, and with a grim determination to reach France. Then they collapsed entirely, leaving queues of desperate people waiting outside St. Pancras, snaking for more than a mile, clinging to the vain hope that canceled services might just be restored. Back at Heathrow, the flow of London taxicabs slowed to a trickle, just as the taxi queues lengthened preposterously. Devious passengers were shamelessly nicking cabs at the back of the line, thumbing their nose at a forest of CCTV cameras, but there were no Metropolitan police in evidence. Not one, only a couple of outsourced Poles and a lady in a burqa, all cowering next to a wan little radiator inside the taxicab hutch. It took five hours to retrieve my bag, and another four and a half to get back to Central London. For the first time in my life I lost feeling in both feet, such was the biting cold. All up, I was stranded at Heathrow for sixteen hours and eleven minutes.

To my infinite relief there was room at the inn: Blessed Durrants Hotel, my home from home, put me back in my old room, and turned on a double whisky, and game pie with mashed potato.

In the days that followed I never managed to reach a human being at Delta in the United States, though it was mildly interesting to learn that my call is important to them. On Monday or Tuesday my office managed to get me shifted onto an Air France desperado escape ticket via Paris yesterday—a 23-hour journey, as it turned out (because of more snow in Paris), but a good proportion of the nearly 500,000 other displaced travelers who got stuck in London this week were not so lucky. Many are still kicking their heels there.

The larger question that troubled many minds in London this week was this: How is it possible for an admittedly unusual four inches’ worth of snow—a tiny amount by most realistic wintry standards—to bring the entire British nation to its knees, and prompt the daily newspapers to use language such as “national embarrassment,” “abject humiliation,” and worse? This is a country that eighty years ago, thanks to a few handfuls of dedicated clerks in Whitehall, quite competently ran a global empire, but is today wholly and demonstrably incapable of functioning under a light dusting of powdery snow. The rail network collapsed. The roads clogged with 24-hour, forty- or fifty-mile gridlock, as on the main artery between Edinburgh and Glasgow two weeks ago. I experienced this for myself. What has gone wrong? It’s not just that there is no conception of the need to shovel (to prevent the formation of lethal floes of pack ice—this happens when temperatures rise, the snow melts, but then freezes again when the temperature drops back down again at night, producing a far denser, and more dangerous frozen surface). For decades it seems there has been no eye trained even on the possibility of snow, nor on the need to maintain the infrastructure and supplies of salt or de-icing fluid that are needed to keep the place moving if indeed the snow comes fast and, by English standards, plentifully, as was the case last Saturday. Yet for the last couple of years this is precisely what has happened. Britain is getting more snow every winter, but the transport system has not yet equipped itself after the manner of Boston, Mass., Buffalo, N.Y., Chicago, Ill., Toronto, Winnipeg, or Saskatoon. And in England the general population doesn’t yet understand what those of us who live in snowy places know we have to do after a storm: Get out there and shovel, or, if you’re not prepared to do it yourself, pay someone to do it for you, and if you fail to take either step you can expect a hefty municipal fine. Perhaps worst of all, where was the spirit of the Blitz, or of Dunkirk? The kindly farmers volunteering with tractors, or hatted, scarved, and gloved matrons bringing thermoses of cocoa and McVitie’s digestive biscuits, or impeccably stoical queueing—in other words the quiet genius of England in times of trouble? Gone, gone, gone—alas. Gone the way of the Empire, almost certainly never to return. It is very sad indeed.

Posted by Angus Trumble at 8:23 PM