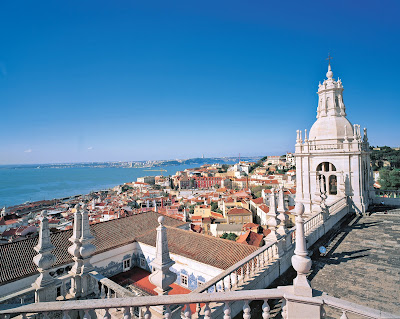 Our four times great grandfather Peter Travers was for over forty years surgeon to the English forces in Portugal; physician to His Britannic Majesty’s Royal Hospital at Lisbon, and eventually also to the Court of Dom José I and Dom Pedro III. He took up his appointment in the immediate aftermath of the terrible Lisbon earthquake of 1755. His reputation (such as it was) seems to have rested for many years on a sensational case of modern clinical practice that was reported to a meeting of the Fellows of the Royal Society in London on January 27, 1757. According to that paper, “An Instance of the Gut Ileum, Cut Thro’ by a Knife, Successfully Treated by Mr. Peter Travers, Surgeon, at Lisbon,” (Philosophical Transactions, Vol. 50, 1757, pp. 35–37), young Travers successfully treated Señor Antonia Josée da Costa, one of the King’s messengers, thus proving that vicious, deep stab wounds to the lower abdomen, perforating both the peritoneum and small intestines, were not inevitably fatal, as had previously been assumed. Still, at first it was touch and go.

According to his report, upon being summoned to the bedside of his unfortunate patient, Mr. Travers thoroughly explored the wound with his index finger, and, concluding that matters were serious, drained and cleaned it as best he could. Obviously without the aid of anesthetic, he repaired the intestines; “reduced,” reattached, and put them back into the patient’s tummy; sewed up the external incision with a needle and thread, and administered an enema consisting of olive oil, the yolk of an egg—the constituents, incidentally, of mayonnaise—and warm water.

In the ensuing three days the patient experienced extreme abdominal pains; continuous and powerfully odiferous vomiting; diarrhea; high fever, and a fast, irregular pulse. So Mr. Travers regularly bled him. He administered further enemas consisting this time of a decoction of wormwood and camomile. He also prescribed by the tablespoon every two hours “an anodyne mixture” of mint-water, liquid laudanum, sugar, three ounces of syrup of rhubarb, and an ounce of “the fresh-drawn oil of sweet almonds.” And to this medicine he added “Dr. Huxham’s tincture of the bark; which was taken, a tea-spoonful, six times a day, in a little mint water; which indeed greatly relieved him.” After three days, showing no signs of deterioration, but very few of improvement (other than that his pulse was slow and weak—Mr. Travers took this to be an improvement) he administered by mouth “absorbent powders” bound in rice water: one drachm each of crabs’ eyes and ground red coral, and two grains of crude opium.

The following day Señor Da Costa slowly began to improve; his pulse strengthened but stayed calm; his diarrhoea, vomiting, fever, and the agonizing pains in his tummy gradually abated. The loose threads came adrift from his wound, which steadily healed over, and thereafter “he was kept seven and twenty days on chicken-broth, and never admitted [allowed] to use any solids during that time: afterwards he was indulged with young chickens, &c.,” at which point he was discharged, and made a complete recovery.

A notable aspect of this remarkable case anticipates by 250 years the uneasy interrelationship that now exists between members of the medical profession and drug companies. Huxham’s “tincture of bark,” more properly known as tincture of Peruvian or red cinchona bark, contains “bitter orange peel,” serpentary (or Virginia snakeroot), saffron, and cochineal, mixed in 20 fluid ounces of diluted alcohol. It was invented by the physician John Huxham, M.D., of Totnes (1692–1768), a son-in-law of the celebrated Captain Thomas Coram of the Foundling Hospital.

Peter Travers privately addressed his original report about Señor Da Costa to John Huxham on August 3, 1756, clearly believing that Dr. Huxham’s tincture had made a vital contribution to the complete recovery of his patient. And it was Huxham, since 1739 a Fellow of the Royal Society, who decided to go public with the case, and read the paper himself. No doubt he was motivated by genuine scientific curiosity, and possibly also a determination to give credit where credit was due to a young colleague working abroad under challenging conditions. Still, the paper attracted much gratifying attention to Dr. Huxham’s “tincture of the bark.” Admiring reports and paraphrases of the paper appeared in The London Magazine, or, Gentleman’s Monthly Intelligencer (Vol. 27, 1758, p. 396); The Gentleman’s Magazine, and Historical Chronicle (Vol. 28, 1758, p. 265), and elsewhere. Indeed the remarkable case of Señor Da Costa’s gut was still regularly cropping up in medical literature of the mid-nineteenth century, almost a century after Huxham’s death in 1768, and more than fifty years after Peter Travers’s on February 18, 1797, by which time he had clocked up more than forty years of continuous service in His Britannic Majesty’s Royal Hospital at Lisbon.

As far as I can ascertain, only one of his direct descendants ever followed Peter Travers into the medical profession: his five times great granddaughter Dr. Sybil Borthwick, our excellent first cousin once removed, though I doubt if she has ever seen fit to prescribe Huxham’s tincture of the bark.

Posted by Angus Trumble at 4:56 PM