The House of Trumble II 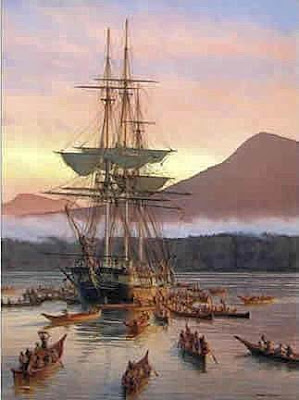 Robert Stuart, the adventurous fur-trapping brother of our three times great grandmother Catherine Stuart (1798–1877) was, like her, born at Balquhidder, in the parish of Callander in Perthshire, Scotland. According to Harvey L. Carter, once of Colorado College (writing in The Mountain Men and the Fur Trade of the Far West, Glendale, Calif.: Arthur H. Clark Company, 1972, pp. 361–64):

“Robert migrated in 1807 to Canada, where his uncle, David Stuart, was an agent for the North West Company. Through his uncle’s influence, he became a clerk for that company in Montreal, where he also learned the French language.

“In 1810, both David and Robert Stuart decided to participate in John Jacob Astor’s Pacific Fur Company. Robert became a partner to the extent of two shares, probably through the generosity of his uncle, who is thought to have assigned to his nephew two of his five shares just prior to their sailing for the Pacific Coast from New York City, September 6, 1810. While the Tonquin was fitting for the voyage, Robert became attached to Elizabeth Sullivan, whom he later married.

“Captain Thorn, who commanded the Tonquin, was a martinet of irascible temper and, at the Falkland Islands, sailed off leaving David Stuart and five others ashore, through some misunderstanding regarding the time of the ship’s departure. When they followed for some hours in a rowboat, he refused to take them aboard until Robert Stuart drew a pistol and threatened to blow his brains out, from which it will be seen that young Robert Stuart had a temper of his own.”

This account of the early nineteenth-century post-transit re-embarkation at Port Stanley of the uncle and great-uncle of our pioneering great-great grandfather William Trumble, though very stirring indeed, is perhaps best forgotten whilst passing through modern airports.

Posted by Angus Trumble at 3:18 PM