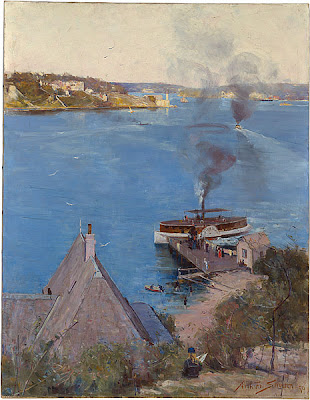 These shreds suggested to me at first that the Davies family arrived in Sydney aboard the Orient line’s S.S. Sorata on January 23, 1883, when they headed the list of Saloon passengers as “Mr. Davies, aged 60; Mrs. Davies, aged 57; Miss M. A., aged 21, and Miss S. C., aged 23.” Mr. J. S. Davies (aged 30) might be the John Stafford Davies who in 1923 was still living at Leddicott, McMahon’s Point, presumably a brother; there is also a Mr. Wm. J. Davies, aged 20, whom I cannot trace.
However, according to her death certificate, when she died Susan was seventy-five, and was unequivocally born in Sydney (having lived twenty-five years in New South Wales, and fifty in Victoria). If this is true, then it certainly casts doubt on the identity of the Davies family aboard the Sorata in 1883, where Miss S. C. Davies is several years older than Susan Compson Trumble. Yet (a) the age discrepancy is not large; (b) it may simply have been a point of vanity that Susan shaved off a couple of years in order to topple her future husband; it was far easier to get away with that then than it is now. As well (c), the Davies’s voyage aboard the Sorata may have been the final leg of an extended visit home to England or Wales; the family could have profitably migrated to Australia up to several decades earlier, or even more.

In any case, on Tuesday, July 21, 1885, the following advertisement appeared on page 3 of the Sydney Morning Herald: “WANTED, a good plain COOK and Laundress; references. Mrs. Davies, Leddicott, McMahon’s Point, N[orth]. S[ydney].” To my knowledge this is our great-great Grandmother Davies’s only surviving public utterance. Jane Davies died on March 25, 1890, aged fifty-three. Her mortal remains lie buried in St. Thomas’s Cemetery in North Sydney. John Davies died the following year, on August 26, aged sixty-three, and was buried beside her: thus further doubt is cast on the true identity of the Davies family aboard the S.S. Sorata.

Mr. Davies’s name (either as “John Davies, Leddicott,” or more often “Davies, Leddicott”) appears frequently in the Sydney Morning Herald right through the later 1880s and the early 1890s as the point of contact for sales and lettings of fairly modest properties in and around North Sydney, but in quite high volume; whether he and his son and namesake were agents or else shrewd investors and property developers is anyone’s guess, but I suspect the latter.
But then there is the draping concern: Was real estate merely a sideline, and did John Stafford Davies inherit not only the family home in Lavender Bay, but also a controlling interest in the family retail businesses also? Regardless, Great-Grandmother Susan Compson Trumble certainly had money. Great-grandfather J. W. Trumble spent a good deal of it sailing back and forth to England to attend the Ashes series at Lord’s Cricket Ground; drafting extremely tedious letters to the Editor of The Times newspaper about how groundsmen ought to maintain a good cricket pitch, and enjoying extended holidays with friends in Scotland and, in the teeth of North Sea gales, playing golf on rugged lowland links.
Posted by Angus Trumble at 2:38 PM