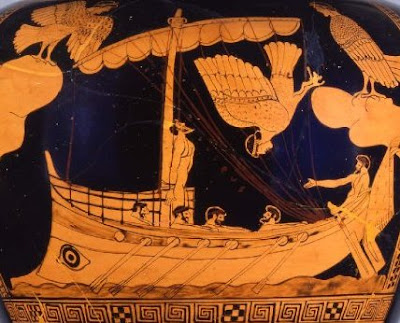 Ping’s home was “was a boat with two wise eyes.”

The custom of painting eyes close to and on both the port and starboard sides of the bowsprit was widespread in China, but also in ancient Greece and Rome. Here is Odysseus’s ship on the famous Siren Vase in the British Museum; many small Maltese boats continue to display eyes that are much like this one. I wonder where else this practice was maintained, and how far back it goes. I suppose the reason for it is not hard to find: Sailors have always been inclined to anthropomorphize their craft—to endow it (her) with gender, for example, so the provision of eyes that guide through heavy weather; watch for shoals and reefs; stare down sea-monsters, and in so many other respects equip the boat with innately protective qualities is merely a delightfully vivid elaboration of that.

110 years ago, in the pages of Notes and Queries, a lively correspondence was prompted by the proposal of N. Hancock Prenter of Trinity College, Dublin, that the speech of Enobarbus in Act II, scene ii of Antony and Cleopatra, made explicit reference to the same ancient custom, following Plutarch: Referring to the Egyptian Queen, Enobarbus says: “Her gentlewomen, like the Nereides, / So many mermaids, tended her i’ the eyes / And made their bends adorning: at the helm / A seeming mermaid steers: the silken tackle / Swell with the touches of those flower-soft hands / That yarely frame the office.” The context is Cleopatra’s barge of state, and, taking into consideration the helm, steering, and tackle, Prenter reasoned: “If we ask any seaman what he means by ‘the eyes,’ he will tell us that they are the ‘hawse holes’—i.e. the holes or eyes in the bow through which the anchor cables are run. Again, any good dictionary informs us that in olden days ships were adorned with painted eyes on the bows—a supposed protection against ‘the evil eye.’ This custom is still extant in the Mediterranean, and, I believe, in Chinese waters. ‘The eyes,’ then, signify ‘the bow.’” A nice try, but I suspect that this is certainly not the only reading.
Marjorie Flack was hardly a sinologist, but evidently leaned heavily on her German expatriate illustrator, Kurt Wiese, who spent a number of years in China immediately prior to the outbreak of World War I. Being at that stage allies and not adversaries, the Japanese interned Wiese as an enemy civilian, and turned him over to the British for the duration of the war; he spent several of those years detained in Australia. Returning afterwards to Germany, Wiese soon fled the shambles of Weimar, and sailed to Brazil where he started his career as a professional illustrator. He migrated to the United States in 1927, where five years later he was ideally placed to furnish Miss Flack with a suitably accurate mise-en-scène for The Story of Ping, and inter alia to make sure that Ping’s junk on the Yangtze (now Yangzi) had “two wise eyes.”
Posted by Angus Trumble at 2:41 PM