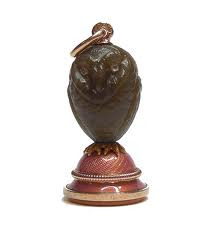 Lately I have been adopted by an owl. This beguiling creature has for the past nearly two weeks hooted subtly but assertively from the branch of a tree not too far from my bedroom window, usually between the hours of three and dawn, but occasionally all night long. The call is penetrating enough to rouse me from my slumber, and, although I find it delightful to have such an unusual guest, at times he can be a little too persistent. Mark Aronson tells me that my owl is seeking a mate, and that the comparatively mild winter explains his early appearance. Certainly last week’s snow did nothing to shake the ginger out of my owl, so I am not quite sure how the weeks ahead will “pan out,” as we say in the United States of America. A brief trip to San Francisco, Calif., later in the week may give me an opportunity to catch up on some sleep, but I feel slightly guilty abandoning my owl in this rather expedient way.

Posted by Angus Trumble at 4:43 PM