What did Thomas Woolner see? 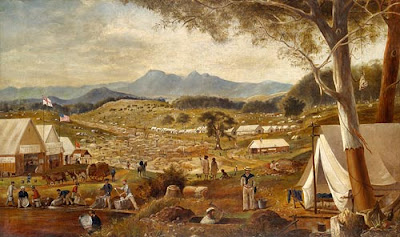 Just before Christmas I sent the following message to the editor of the Paris Review, hoping it might be included in the advice column in the online daily, then promptly forgot all about it:

Dear Lorin, May I once more avail myself of the generous hospitality of your advice column to help solve another of my small mysteries? I am currently editing the 1852–54 journal kept on the Australian goldfields by the Pre-Raphaelite sculptor Thomas Woolner. It is a fascinating document, from which most of the best bits were ruthlessly excised prior to publication in 1917 by his industrious daughter, à la Cassandra Austen, though fortunately they survive in the manuscript. On November 8, 1852, Woolner and his two traveling companions strayed from the main road north from Melbourne toward the diggings, became separated, and got lost in the bush: “I went on and saw—what produced this observation, ‘That [he] who wants to avoid strange sights must shun byways.’ A brutal, worse than brutal sight.” So far I have not been able to identify the quotation, if indeed it actually was one. It seems possible that the inverted commas were merely added for emphasis; it’s a rather clunky aperçu, yet I wonder if any of your readers recognize it? Elsewhere in the journal Woolner recorded without hesitation, and in detail, even a measure of cold detachment, scenes of drunkenness and violence, shady characters, the accidental drowning of a friend, and several murders in and around the goldfields. On this occasion, though, whatever Woolner saw so shocked him that he was obviously not prepared to note any particulars. Bodily, I presume, but what on earth was it? On that gothic note, may I also add my sincere compliments of the season? Angus Trumble.

This minor editorial problem has been rattling around in a quiet corner of my head for many months, and I thought it would be rather satisfactory if someone might come up with a plausible answer, or indeed an implausible one provided it was correct. Yesterday my attention was drawn to Lorin Stein’s extremely generous, flattering and, above all, helpful response:

Dear Angus, When you say jump, The Paris Review does not ask how high. We put our best people on this one. The results—while inconclusive—were revealing. Within minutes, our Southern editor, John Jeremiah Sullivan, wrote in from North Carolina with a passage from Tommaso Grossi’s Marco Visconti in an 1849 translation. This looked promising at first, only it had nothing to do with Woolner’s text, and was rejected. (Sullivan: “Could it have been this? My gut says no [and so does mine].”) Next our associate editor, Stephen Andrew Hiltner, proposed a line from the Tao Te Ching, but admitted that Woolner was unlikely to have known Chinese [correct]. Our deputy editor, Sadie Stein, claimed—impressively, and with some vehemence—to recognize the sententia from Horace [much warmer]. The poem has not been found. Our Latin consultant, Brian FitzGerald of Lincoln College, Oxford, doubted a classical provenance. He directed us to some chapters from Proverbs, in which, however, there is no mention of strange sights. Our managing and Web editors, Nicole Rudick and Deirdre Foley-Mendelssohn, came out strong for Dante. So far we are unable to supply the relevant verse. One of Sadie’s contacts, a professor of Greek, suggested Oedipus Rex, either the messenger reporting Laius’s death or else a speech by Oedipus himself. Our close readings have not produced a match. On the other hand, we have now figured out what Woolner saw. (Private letter to follow.)

This last communication I am most eager and anxious to read. Beyond this small army of enthusiastic in-house helpers, a generous reader, who self-identifies as “J. A. Zugot,” submitted the following comment…twice!:

Reading Woolner’s quotation, “That [he] who wants to avoid strange sights must shun byways,” I too was reminded of bad translations from the Chinese or Japanese, or of some clunky re-doings of Sophocles and Horace. Dante, Milton—who not? Your staff isn’t—literarily—alone for the holidays…But that mention of Proverbs, by your guy from Oxford (surely he was thinking of those strange warnings against “strange women”), set me down another, um, “byway.” The Talmud, specifically its section called Avot, is often read separately under the title Pirke Avot, “Ethics of the Fathers.” These fathers are called the tannaim, or “repeaters,” and they, repeating mostly in Jerusalem, essentially committed the Oral Law—the Jewish oral tradition—to parchment, roundabout the first two centuries of the previous millennium. This could go on and on. Better you should search the internet. Anyway, from Avot: “He [their teacher, Rabbi Yochanan ben Zakkai] said to them, Go and see which is the good way that a man should cleave to. Rabbi Eliezer said, A good eye: R. Yehoshua said, A good friend: and R. Yose said, A good neighbor: and R. Shimon said, He that foresees what is to be: R. Eleazar said, A good heart. He said to them, I approve the words of Eleazar ben Arak rather than your words, for his words include your words. He said to them, Go and see which is the evil way that a man should shun. R. Eliezer said, An evil eye: and R. Yehoshua said, An evil companion: and R. Yose said, An evil neighbor: and R. Shimon said, He that borroweth and repayeth not—he that borrows from man is the same as if he borrowed from God (blessed is He)—for it is said, The wicked borroweth, and payeth not again, but the righteous is merciful and giveth: R. Eleazar said, An evil heart. He said to them, I approve the words of Eleazar ben Arak rather than your words, for your words are included in his words.” Now here’s where I’m going to lose you: Freemasonry. “The Constitutions of Free Masons,” ca. 17something and so among the oldest surviving documents of the Brotherhood, states that God Himself, the Great Architect, is the primeval Grand Master. Fellow lodge members include Adam, the three Patriarchs, Moses, the various Israelite kings and high priests, Jesus and his dozen apostles. And obviously the entire Masonic temple model, symbology to rituals, was based solidly on the two Temples of Jerusalem. Now, after the Roman destruction of the Second Temple in 70 C.E., Judaism lost its geographic center and became wholly bookish. The rabbis of the Talmud kept the secret, at least selective, traditions alive. It was natural that they, and their two local lodges—those of Grand Master Rabbis Hillel and Shammai—would be Masonically adapted/adopted. Freemasonry from the Talmud, a very stupid, stupidly fascinating book from 1905, written by A. (no further clarification) Posman, makes this explicit. Here, R. Eliezer ben Hyrcanus’ responses have been altered to: “A good eye is the right path for man to adhere to.” “An evil eye is to shun the path.” Again, here’s Woolner’s: “[He] who wants to avoid strange sights must shun byways.” Of course, the Pre-Raphaelite Brotherhood was itself a type of lodge, and indeed its original members, including Rossetti, Millais, Holman Hunt, and Thomas Woolner, were all Masons. As Albert Boime, in the final volume of his magisterial A Social History of Modern Art, notes: “‘Brotherhood’ carried unmistakable allusions to a Freemason-like fraternity. Significantly, when the group agreed to use the monogram P.R.B., each member had to swear an oath to keep its meaning secret.” So, another year over, another hour wasted. From the Oral Tradition to the Written Tradition (the Talmud), to an English Masonic traducing, to oral Masonic lore—that’s my guess. Strange.

I never knew that Rossetti & Co. were Freemasons, and will—with all due respect, and many thanks to J. A. Zugot for his efforts on my behalf—check in with Barringer and Prettejohn for confirmation. If so, it seems a rather plausible explanation, which nevertheless leaves unanswered the larger and definitely more baffling question as to what on earth was the “brutal, worse than brutal sight” Thomas Woolner glimpsed in the Australian bush that shook him so.

Posted by Angus Trumble at 1:01 PM