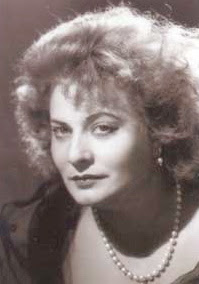 When I was a rather shy and extremely inexperienced undergraduate in the early 1980s, I indulged an immoderate enthusiasm for grand opera. That interest has never entirely gone away, but thirty years later I am struck by how inadequately I ever grasped the convergence of poetry and music and emotion in the great love scenes especially—which I was then singularly ill-equipped to appreciate. True, Giuseppe Verdi managed to fire up a certain amount of adolescent passion, never more so than in the love scene in Act I of Otello, but it has taken me half a life-time to learn to listen with the heart, and discover in music drama the expression of real emotions, and not some exciting approximation of something big that might be waiting around the corner, or not. Who has not looked back with a wry half-smile, and said to himself, “I was just too young”?

So it is that I have been listening lately to a crackly old recording of the remarkable Bulgarian soprano Ljuba Welitsch, a star who shone as brightly in the decade between 1942 and 1952 as indeed she shone briefly, and whose glorious voice, alas, faded much too soon. Here is her publicity photograph; talk about star power in living black-and-white! In May 1948, at the height of her powers, Miss Welitsch recorded in London the famous letter scene from Piotr Ilyich Tchaikovsky’s Eugen Onegin, with the Philharmonia Orchestra conducted with exemplary finesse (and an admirably retrained tempo) by Walter Süsskind. Everyone knows, or ought to know the story: Tatiana Larina exchanges only a few words with the coolly detached Onegin when his friend Lensky, a neighbour, brings him to visit her sister Olga and their parents, but that encounter, in her own home, unleashes a torrent of emotion in Tatiana’s mind, and, in the privacy of her bedroom later that night, overwhelmed by a fever of passion, and of doubt, she sits down to write Onegin a letter—pouring out her very soul, with predictable consequences upon which the rest of the story hinge.

What is so remarkable about this particular recording (alas not yet propelled onto Youtube; though Renee Fleming is superb here), with all its technical limitations, and the further disadvantage that the piece was sung in a rather leaden German translation from which the richness of those marvelous Russian consonants was eliminated, is the apparent recklessness with which from the very opening Ljuba Welitsch hurls herself into the performance, as if from an exposed cliff-top: “Everywhere, everywhere I look, I see my fatal tempter! Wherever I look, I see him!” The quality of her voice, moreover—which is also what made her such a sensational Salome, and maybe also conspired at length to ruin it—combines bell-like clarity, urgency, unguarded girlishness, and a visceral unrestraint, which are all, of course, exactly right for Tatiana. You feel she gives it 250%, with all the breathtaking risk that that must have involved. Again, this is somehow right for Tatiana, though no voice teacher would ever these days responsibly recommend it. The internal shifts between torrential passion to doubt and fear and back again are written into the score, with its restive drive and accelerating heartbeat, but the job of making it all hang together is really the soprano’s. Hers is the startling vocal line, and Welitsch is never more believable or moving than in the moment of climax, when, about to sign and seal her letter to Onegin, Tatiana impores him: “I wait for you, I wait for you! Speak the word to revive my heart’s fondest hopes or shatter this oppressive dream with, alas, the scorn, alas, the scorn I have deserved!” I challenge anyone who has ever fallen deeply in love not to recognize at least something of the feeling—though for most of us it is couched in prosaic language: Will he or won’t he? Does he or doesn’t he? What are these feelings, whose sheer intensity I can barely understand? As usual, great artists hold up the mirror, and it is up to us—whether we are in the theatre with Tchaikovsky, in an art museum maybe with Tilman Riemenschneider (I wish), or just listening to the late, great Ljuba Welitsch on the radio—to peer into that mirror, and discover there an emotional experience, real and true. Then, with luck, we may shed tears of understanding. Vezdye, vezdye, on predo mnoyu! Everywhere, everywhere I look, I see him!