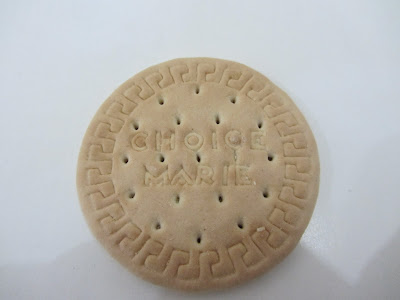 Last week when I went to meet our extraordinarily hospitable colleagues at the South African National Gallery in Cape Town, they gave me morning tea—proper tea out of a pot, sitting down at a table, with cups and saucers, and a generous plate of marie biscuits (rhymes with starry). I don’t think I’ve seen a marie biscuit since early childhood, and I immediately thought of Gran in Myamyn Street. It was quite eerie: the canonical key pattern around the edge; the lettering in the middle, “MARIE”; the pale colour; the dense composition, not too hard but definitely not crumbly; the comforting, non-assertive ur-biscuit flavor—all these seemed so familiar, so vividly the same. My own little madeleine moment. There are many remarkable things about the South African National Gallery, but my delightful reunion with the marie biscuit was a special bonus.

According to various sources, the marie biscuit was invented in London in 1874 by the firm of Peek Frean & Co. to commemorate the marriage of Queen Victoria’s second son, Prince Alfred, Duke of Edinburgh, to H.I.&R.H. the Grand Duchess Marie Alexandrovna of Russia—and by that neat set of circumstances gained traction throughout the Empire. Peek Freans had earlier achieved success with their garibaldi biscuit (1861), but as far as I can recall only the marie was ever a middle-class morning-tea staple in the suburbs of Melbourne. Prior to my visit to Cape Town I was not aware that it enjoyed the same degree of prominence in South Africa—so I imagine the marie found its way onto the bridge tables of Hong Kong, the verandahs of Candy, Peshawar, and Nairobi, and I daresay into the better tea rooms of Halifax and Christchurch also. Splendid.

According to the South Australian Register (Saturday, November 22, 1919), “The Prices Regulation Commission on Friday approved tentatively of an increase of ½d. per lb. in the price of bush, coffee, and marie biscuits. The new prices are 7d., 9d., and 9½d. per lb. respectively, with transport added for the country districts. A further investigation will be made by the commission at a later date.” How sensible, and what better indication than this of the lasting importance of the marie biscuit (the costliest of the three) as a binding agent, both gastric and imperial.

Posted by Angus Trumble at 1:38 PM