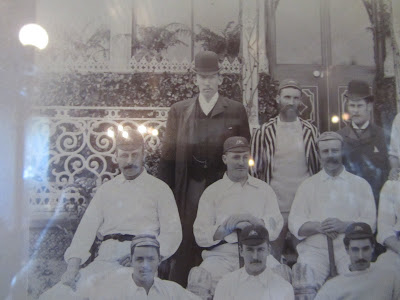 The week before last I went from Cape Town to Pretoria aboard the Blue Train. The journey takes about 30 hours, and the train stops only once, after about six hours, for passengers to stretch their legs for about an hour in a tiny hamlet on the edge of the Grand Karoo plateau, which looks to me an awful lot like the Wimmera, or, at a pinch, the Mallee.

The halt is called Matjiesfontein and there are a few old houses, some dusty-looking sheep, a defunct post office, a cricket pitch of sorts, some stables abandoned by the British army after the end of the Boer War, and a dear old “spa hotel,” the Lord Milner, with a public bar where the Blue Train people had arranged for us to have refreshments.

Bear in mind that these were the first premises in which I had set foot outside Cape Town, only four days after I arrived from London. I have never before set foot upon the continent of Africa.

In the bar there were a clapped out but functioning upright piano, a huge Edwardian cash register, a large clock that had stopped at half past six, and an assortment of ancient sporting and other team photographs hanging on the walls at either side of the front door, and on the short sides of the room, flanking the counter.

Those sporting team photographs included the Blair Lodge School first cricket XI for 1895 (in Polmont, near Falkirk in Stirlingshire, Scotland, about 20 miles from Edinburgh); the same school’s officer corps of cadets; the Nottinghamshire county XI for 1897; Major Barton’s Cape XI (date unknown); Lord Hawke’s South African XI (1898–99), and “the Australians (Seventh Team) 1890,” in which, on the left, wearing his trademark bowler hat, a very youthful but nevertheless unmistakable Hugh Trumble stands, our great-grandfather J. W. Trumble’s famous younger brother. Of course he does!

I couldn’t believe it, but yes: the relevant portion of the caption read: “H. Trumble.” There must be some algorithm relating to colonial populations, relatively high birth rates, patterns of descent, and the intercolonial and international Edwardian cricket enthusiasm that would go a little way towards accounting for this amazing coincidence. Even so, I was and am still completely astonished by it.

I have no idea how this rather fine group photograph found its way to Matjiesfontein in the Grand Karoo. Great Uncle Hugh certainly played with the Australian tourists in the Cape and Natal in 1902, but this was taken twelve years earlier. It’s a possible explanation, and at this stage the only one that is in any way viable. At any rate, it is in fine shape and so am I.
Posted by Angus Trumble at 4:53 PM