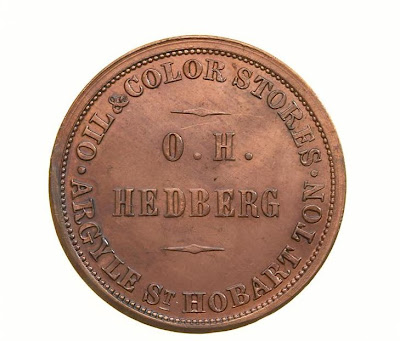 Among the detritus floating at the bottom of an old deed box inscribed “Rutherford Trust,” that Dad kept for years in his study at home in Melbourne, I have this morning found an old copper coin, with the baffling inscription (obv.): “OIL & COLOR STORES • O. H. HEDBERG • ARGYLE ST. HOBART TO[W]N” (above) and (rev.) O. H. HEDBERG • HALF PENNY • SWEDISH HOUSE HOBART TO[W]N.” I have never before encountered artists’ colourmen who doubled as issuers of currency, let alone in Van Diemen’s Land, so in search of an answer to the vague question “huh?” I did some digging, and have just finished reading an entirely absorbing article in the Tasmanian Numismatist, vol. 9, no. 2 (2004), viz.: “Tasmanian Tradesmen’s Tokens Revisited,” by the estimable Graeme Petterwood.

It turns out that the explanation for the existence of this odd little private Tasmanian halfpenny is relatively simple, and what follows is merely a condensation or digest of Petterwood’s fuller, livelier, and more expert account.
Throughout the British Empire during the Regency period there was a persistent shortage of small change. Paper promissory notes and letters of credit were issued and circulated in many colonies, but there was also a host of different coins, not necessarily even British, that trickled in from passing ships, and circulated freely alongside them. When these coins grew scarce, a simple barter system evolved—often centering on rum and tobacco. In Australia rum, in particular, was controlled by the officers of the deeply corrupt New South Wales Corps until Governor William Bligh tried to put a stop to the nuisance, thereby precipitating the so-called “Rum Rebellion” of 1808, and his successor Governor Lachlan Macquarie finally disbanded the corps in the following year.

In September 1813, Macquarie ordered a large shipment of £10,000-worth of silver Spanish dollars from the East India Company in Madras, each valued at 5s, to be centre-punched to produce two coins from one, that is, a ring, and a smaller solid dump—this idea was not new; the same technique was earlier used to create small change at Prince Edward Island. The ring (thenceforth known as the “holey dollar”) would remain pegged at 5s, but the smaller dump would be re-struck, and circulated with a value of 15d. The colonial treasury obviously made a substantial profit, and, for a while, viable, small-denomination currency circulated in Sydney and elsewhere in the Australian colonies.

In 1824, the Bank of Van Diemen’s Land opened in Hobart, and issued sterling under licence from the London & Westminster Bank. Before this, Tasmania was awash with paper promissory notes of any and all values above 3d, and hardly any coins. The issuers of these notes—which could be purchased in bundles or booklets of 100 blank forms—promised to reimburse the bearer for the amount stated on the note. It was, in essence, a checking system unsupported by any bank, and therefore completely unreliable. Paper “money,” meanwhile, in the form of official commissariat bills of exchange, was not much better.

Instead, the Spanish silver dollar became accepted as universal currency, and Van Diemen’s Land did not hesitate to use it alongside sterling at a rate of exchange that was sometimes more favorable than that of the Bank of England. Even promissory notes could be issued in Spanish dollars, but the bank cashiers routinely converted them back to sterling at a substantial discount. Even this did not discourage widespread speculation in private Spanish-dollar promissory notes, so in 1826 the colonial government pegged the dollar at 4s 4d, and prohibited the exchange of notes worth less than £1, and all such notes made out in Spanish dollars. This produced an instant and remarkable effect of deflation, in the absence of any viable colonial money at all, until private banks hurriedly opened for business and began issuing more sterling to fill the cash void. These included the Tasmania Bank (1826), the Derwent Bank (1827), the Launceston Savings Bank (1835), the Hobart Savings Bank (1845), and the deeply unpromising-sounding Convict Savings Bank (1829). None of this solved the problem of small change, so foreign coins continued to circulate freely, but not nearly enough to satisfy the need or demand.

In England, the practice of issuing copper and silver tradesmen’s tokens comparable in style and weight to minted coin was well established, most often as an ingenious form of novelty advertising. Many private manufacturers of such unofficial penny-tokens were thriving in England when the First Fleet reached Botany Bay in 1788, but few of the tokens themselves found their way to Sydney or Hobart Town, for the simple reason that there was at first nothing at all to buy, and convicts were not allowed to have money. The first tradesmen’s token prepared for exclusively Australian use was made in England in 1823 and introduced the following year to Van Diemen’s Land. It was a silver shilling piece, for Macintosh and Degraves, who then operated the Cascade Saw Mill near Hobart Town.

Gradually more tokens were privately produced for public circulation in Australia, of varying degrees of poor quality from the crude to the downright atrocious, but in the end British manufacturers produced quality pennies and halfpennies, even with Australian motifs such as the kangaroo that migrated via reproductive prints all the way down from George Stubbs’s 1771 treatment of the same subject. After the Macintosh and Degraves silver shilling there were eventually twenty more local issuers of copper or bronze tokens, among them Lewis Abrahams the draper; I. Friedman the pawnbroker; W. D. Wood the wine and spirit merchant; Alfred Nicholas’s tea warehouse; R. S. Waterhouse the draper; Joseph Moir the ironmonger; J. G. Fleming the grocer; R. Andrew Mather the draper; H. Lipscombe the seedsman; R. Josephs the customs agent; H. J. Marsh & Brother the ironmongers; William Andrew Jarvey the pawnbroker and general clothier; G. Hutton and R. Henry, both ironmongers—and they’re only the ones in Hobart. Naturally there were vigorous competitors in Launceston. Some of their tokens were manufactured in England and shipped out in barrels, but others were made in the new die-sinking, token-making, and medal-casting establishment of Thomas Stokes in Melbourne, or by other reasonably competent metalsmiths and manufacturers who migrated to Australia and mostly set up shop in Port Phillip.
Olof Hilmer Hedberg was born in Sweden, and came to Van Diemen’s Land in 1844. At first he worked at the government’s bonded store, but soon started what rapidly grew into a successful whaling business. At its peak, Hedberg owned two large whalers, the Victoria and the Maid of Erin. Tasmanian whaling was profitable until the mid-1850s, when the price of blubber and whale oil rapidly declined from £83 per ton, and whales themselves became scarce due to over-fishing. Compounding these losses, Hedberg’s flamboyant investment in a number of coal mines on the island’s east coast failed completely, and he was forced to open a much-reduced mixed business and commission agency in premises he named, rather grandly, “Swedish House” in Argyle Street, Hobart. It was for this business that this little copper token was issued. Perhaps it was the pleasure and satisfaction of issuing coins, in the manner of a bank, that partly distracted Mr. Hedberg from the sharp reality of his reduced circumstances, and his unobstructed view of mist hanging gloomily over the summit of Mt. Wellington.

Interestingly, Hedberg’s new business gradually moved towards a more or less exclusive dealership in artists’ materials. In early 1858 on the front page of the Hobart Mercury he took out an advertisement for “Sperm Oil, Black Oil, Colza Oil, Paint Oils, Turpentine,” but in Walch’s 1866 Tasmanian Almanac a much wider range of paints, oils, and varnishes was offered, and there is no longer any mention of sperm oil, etc. It is not clear what, if anything specific, carried Mr. Hedberg commercially all the way from whale blubber to artists’ materials, but it may simply have been a natural affinity with oils—animal, mineral, and vegetable. It seems likely that this token was made in the early to mid-1860s.
Until recently Mr. Hedberg’s tokens were thought to have been struck by W. J. Taylor of London, but later “mules,” that is, struck from dies that were originally made for two separate issuers, are not necessarily Taylor’s own work. These may have been made by and/or for the firm of Ralph Heaton & Sons in Icknield Street, Birmingham. At the very least their provenance is uncertain.
Despite his commercial failures, Mr. Hedberg achieved some popularity in Hobart and Tasmania. When he died on August 22, 1884, the Tasmanian reported that for two whole days most if not all the ships at anchor in the Derwent River flew their ensigns at half mast—more, and for longer, I daresay, than any banker or businessman in our present economy could ever possibly expect.
Posted by Angus Trumble at 11:55 AM