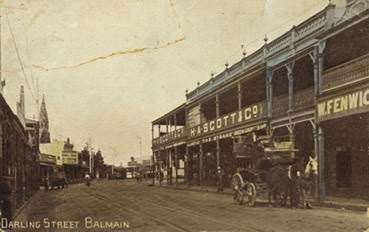 One of the only documented public performances by Desda, our great-great-grandmother, Jane Davies, took place on Friday evening, December 9, 1859. It was advertised on the front page of that day’s Sydney Morning Herald in the following terms: “SCHOOL-ROOM, ADOLPHUS-STREET, BALMAIN. SPAGNOLETTI’S BENEFIT CONCERT. THIS EVENING, December 9, 1859. Artistes:—Madame Flora Harris, Nina Spagnoletti, Lady Amateur, Mr. Marmaduke H. Wilson, Spagnoletti, Gentleman Amateur. Conductor, Mr. E[rnesto]. Spagnoletti. To commence at eight o’clock. Tickets 3s 6d. each; children under twelve years, 2s. each.” It seems possible that Spagnoletti’s benefit concert was primarily for the benefit of Spagnoletti; the matter is left deliberately vague, and the ticket prices were comparatively high. However, on page three, the Herald’s music critic was careful to identify “Lady Amateur” as none other than Desda. It is possible, though by no means certain, that “Gentleman amateur” was Desda’s first husband, the still living Frederic Messiter, of Malmsbury, Wiltshire. This would have made it far easier for Desda to perform not only under the rubric of “lady” but also plausibly as “amateur”: “CONCERT.—Balmain seems quite a musical suburb. Only about a fortnight since we reported a successful and well attended concert in aid of the funds of the School of Arts, and our columns of to-day advertise another for this evening. Signor Spagnoletti intends favouring the residents of Balmain, and we trust that they in turn will patronize his efforts at once intellectual and entertaining. Four new songs appear in the program, two of which have not yet been sung in public, ‘Cooey,’ written by the Australian songstress ‘Desda,’ is one of them; the music of which, by Spagnoletti, we hear from private sources is extremely new and pretty.”
Posted by Angus Trumble at 4:35 PM