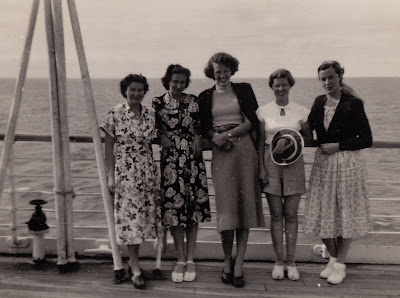 Among the many papers she left behind, Mum kept a photograph album, a souvenir of her beloved older sister Anne (center), who sailed with friends to England aboard the P. & O. ship R.M.S. Strathaird in January 1949. The voyage was long, but leisurely. The ship sailed via Fremantle to Colombo in Ceylon, and on to Bombay, Aden, Suez, through the canal to Port Said, and on through the Mediterranean to Southampton. 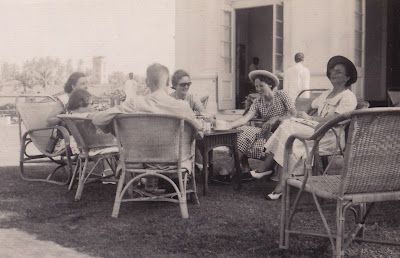 Some of the landfalls allowed for sightseeing, as, for example, when Anne spent a day on the beach at the Mount Lavinia Hotel in Colombo (above, left to right: Eve Chauvel, Sue Freeman, Frank and Ena Freeman, and “Betty”), or inspecting the Hanging Gardens on Malabar Hill in Bombay, or the Towers of Silence at Kemp’s corner nearby (“where they put the deaders,” as Anne put it). It was an established custom for family, friends, and other well-wishers to wave like mad and even signal from the clifftop at Portsea when ships approached the Heads, and made their final departure from Victoria. In an air letter to Anne dated January 19, 1949, which evidently caught up with her in Fremantle, Mum wrote: 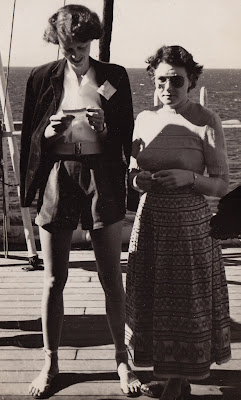 No doubt you found the signaling on Sat. evening very confusing as I believe half Portsea was signaling to friends aboard the Strathaird. Some people were signaling to John Darling with an 8” Aldis lamp, so expect that would cut out all other smaller lights. Alec [Trumble, aged 12] was signaling “Anne B” as hard as he could go, but as far as I can make out, he kept forgetting the letters, having to turn the light on and look them up and start again, so doubt whether it was particularly outstanding. However, hope you saw something. When we were waving goodbye a man knocked my hat off and me nearly out but never faltering, I rallied bravely and waved on. Did you hear us screaming goodbye Anne? Mongie was cheer leader there and a very good one she made too…I’m dying to hear what it’s like and whether you’ve been elected queen of the sports deck. 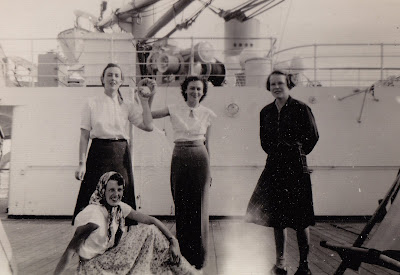 Anne does seems to have spent a good deal of time on the boat deck playing quoits, but there are also some excellent photographs of her with various young table companions wearing party hats and fancy dress. These were taken by an on-board commercial photographer. 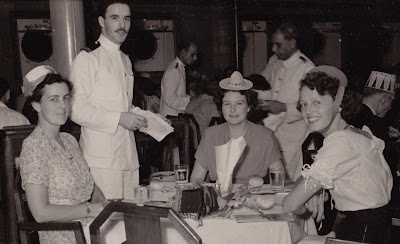 On the back of this one (below), Anne noted: “Whose mother uses Persil? But they all use Pepsodent.” 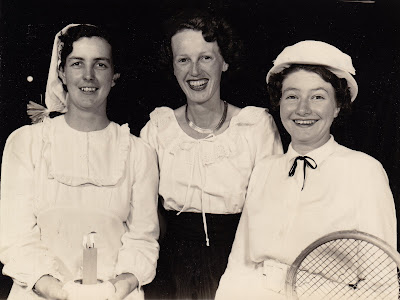 Evidently Anne took this one of “boat drill” because, she noted, “second from left—our table steward.” 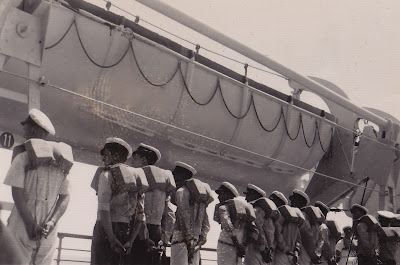 Anne was, of course, young and beautiful. Here she is on the boat deck again, in a little shot simply inscribed “Two Hubba’s.” 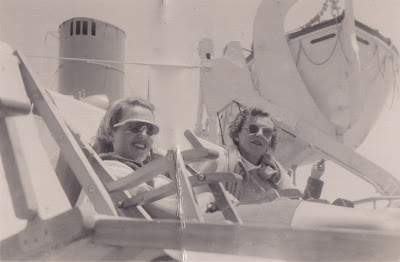 Most of Anne’s photographs, however, carry no inscription at all, and very few of the gradually multiplying horde of handsome young male admirers are identified. 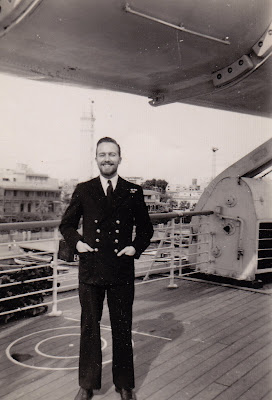 Posted by Angus Trumble at 8:15 AM