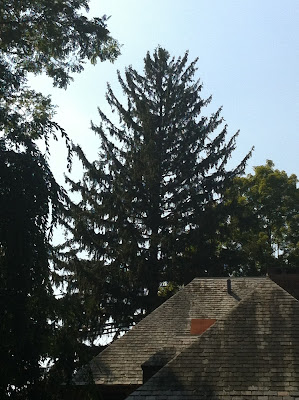 One of the reasons I fell in love with my house in the first place was the Norway spruce. It must be at least as old as the house, and is now more than twice the height. If the Forest Road (west) side of my house is comparatively horizontal in emphasis, the spruce hoists a delightful exclamation mark on the right. In so many respects they fit together perfectly. (This view is from the north.)

However, two arborists who know what they are talking about lately broke it to me that my tree is seriously ailing, and will eventually need to be cut down. There are certain things in the short- to middle-term, in other words over the course of the next few seasons, that can be done to improve the health of my fine old tree, but I am told none will alter the long-term prognosis. There is also the possibility, however remote, that should we experience another storm as severe as Hurricane Irene my tree could snap in two, and the potential consequences of that are unthinkable.

Mum loved trees, and I think I have inherited that rather endearing quality from her. Much of her life was devoted to protecting various trees at Metung from the ravages of relentless westerly gales, the poor soil (little more than a sand dune, really), the possums, and other enemies. In the circumstances she accomplished much. I can only think of one occasion when Mum accepted that one of her trees, or indeed any tree, really needed to be cut down. That was the enormous, rather squat cypress that stood directly in front of the house, entirely blocking the view of Bancroft Bay—though I am quite sure that was not the reason why it was cut down. I remember also how wistfully Mum regretted the loss of the wonderful old liquid amber that the new neighbors felled to make way for the house they built in 1979, right after flattening old one at 18 Denham Place. Now, barely eighteen months since I took possession of my very own, for the first time in my life I am faced with the unwelcome prospect of having to cut down a tree, and not just any old tree—a mighty presence, an old soldier, a stalwart veteran of a hundred storms, still standing ramrod straight but these days with a discernible stoop. It just isn’t fair.
Posted by Angus Trumble at 12:04 PM