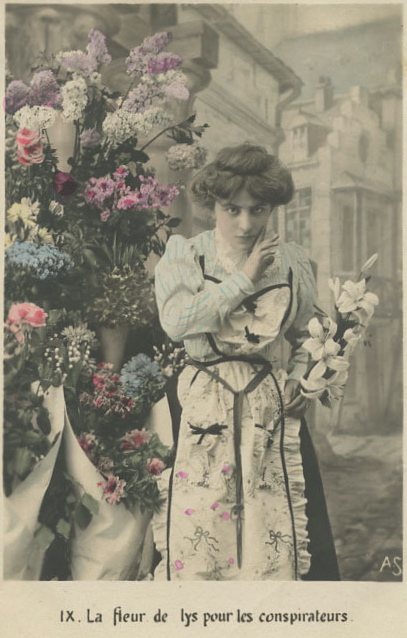 As I have indicated previously, most information about the better florists operating profitably in Edwardian London and elsewhere is usually contained in trivializing shreds of humorous gossip in the press—little more than column filler, as in the following example, but with a surprising capacity to endure. As is indicated by the by-line, this article originated in the New York Herald, and made its first subsequent appearance in the Ann Arbor Argus on Tuesday, January 1, 1895 (page 4), a suitably chucklesome bon-bon for New Year’s Day observances in the frigid Midwest. Seven years later it was still doing the rounds in Australian newspapers, appearing word-for-condescending-word in that organ of Western District hauteur, for example, the Portland Guardian (Monday, June 30, 1902):

That any man can step into a florist’s and order a bouquet for any lady is no longer possible in New York. There is a florist, and a very exclusive one, who refuses all orders that do not seem just “conventional,” to be very polite about it. An elderly man unknown to the florist was refused a bouquet to be sent to a schoolgirl, and a young sport’s greenback was handed back to him when he ordered a box of flowers for a beautiful society leader whom he had admired in her Victoria—New York Herald.

First let us now begin to identify some patterns. The “fashionable florist” and the “West End Florist Girl,” as we have seen, both laid particular emphasis on the stratagems of “old men,” and certain vaguely questionable habits of the young, such the “coster chap” with the impertinently flamboyant buttonhole that so vexed the latter. These are beginning to look suspiciously like tropes. Second, there is the transatlantic dimension. Should we assume that society florists in Edwardian London provided the template for florists aspiring to exclusiveness in New York? Maybe, maybe not. Third, and most intriguingly, let us consider an ethical problem that lies at the core of the joke. Assuming in this case that the source of information can only have been the exclusive New York florist him- or herself—and incidentally that question of gender is an increasingly intriguing one—how hid the florist know that the Miss so-and-so for whom he tried to purchase the bouquet was an inviolable schoolgirl unless the creepy old man readily disclosed it in the first place? It seems unlikely that the florist had the time or resources with which to conduct discreet on-the-spot inquiries. And how did the florist know that the young sport’s acquaintanceship with the beautiful society leader was based solely on admiring her impertinently from afar, and in public, if he had not freely admitted as much? (A “victoria” was an open horsedrawn carriage.) This would suggest that both would-be customers regarded the florist as pretty accommodating, but that the florist’s claim to exclusiveness was at this date strongly wedded to the concept of strict propriety. I doubt if the loose morals on one side and the aspiration to respectability on the other were purely American qualities. No doubt the better London florists attempted to navigate similarly shark-infested waters.

The author of the ugly piece about “The West End Florist Girl,” meanwhile, (The London Journal, March 11, 1911, page 468) concluded by reluctantly making “his way out of the sweet-scented realm into the land of noise and bustle, motor smells and grimy smoke,” a valuable reminder of the ubiquity of the motor car, and its deleterious effect upon central London. Yet even this was an issue that the better florists were called upon to alleviate, if any of the following grounds for disapproval, expressed in 1909 by the Scotsman, actually existed:

The ultra-fashionable, wasteful woman of “society” is most particular just now (says the ‘Scotsman’) about having a supply of flowers for her motor car. The idea is to leave a standing order with a florist to send a big bunch of roses, or violets, or even orchids, to the garage every morning, where the posies are placed in receptacles inside the car. There they are when the machine is brought around to the house, and the interior of the [Demi-] tonneau [a Cadillac motor car] is by that time nicely perfumed. Besides, the flowers make the car look very nice indeed. A fresh bunch may be placed in the car in the afternoon, and again in the evening, to perfume the car for madame’s progress to the theatre. [Launceston Examiner, Saturday, March 20, 1909, page 2, and Dubbo Liberal and Macquarie Advocate, Saturday, April 3, 1909, page 7.]

Obviously the point here is to mock wasteful Madame, but it would be hard to do so if there were not some plausible premise. And, now, I think, it is time to seek more scraps of information about the better London florists in the fruitful realm of the theater...
Posted by Angus Trumble at 10:25 AM