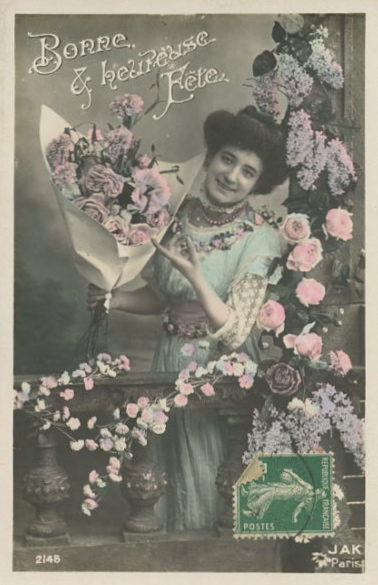 If presentation at Court furnished the most socially advantageous and lucrative branch of the Edwardian retail flower trade, its bread-and-butter were weddings, funerals, and the theater. I suspect that middle-level retailers throughout the empire were rather more closely wedded to the latter than has hitherto been fully grasped. In Perth, Western Australia, for example, considerable excitement was aroused by the Anderson Theatrical Company’s touring production of The Mariners of England at the Theatre Royal, a dramatic reconstruction, correct in every detail, of the Battle of Trafalgar on the deck of H.M.S. Victory, for which “the box plan will be on view at Miss Fitts’s florist shop, next to the theatre, to-day” (The West Australian, Monday, October 26, 1903, page 4). We can safely assume that Miss Fitts did not make the Theatre Royal’s box plan available to any and all inquirers as a selfless gesture of charity. Nor was the proximate location of her premises in any way accidental. There is of course the almost defining model, here, of the Covent Garden flower markets and their proximity since at least the eighteenth century to the Royal Opera House and many other West End theaters. Bernard Shaw’s Pygmalion (1912) rises from the bedrock afforded by the bottom end of the trade, and, of course, flower-sellers such as Eliza Doolittle were the brutalized foot-soldiers of a huge retail army at the head of which stood in command Edward Goodyear of The Royal Arcade, Albemarle Street—armed with his royal warrant as supplier of flowers to the Court. That army has been well covered through the second half of the twentieth century by social historians, but we still know almost nothing about the generals or their structure of command. And this partly explains why I have become so interested lately.

From the other direction, that of the stage door, we have amusing evidence of the deployment of upper-end floral tributes for hard-nosed publicity purposes. As before, that evidence needs to be weighed carefully because of a measure of thankfully unabashed mockery with which it was presented and packaged for the press. The following article circulated widely throughout Australia in 1909:

A lecturer, talking of economy, cited the case of a leading lady as told to him by her manager. The manager one Monday night entered a leading lady’s dressing-room with a huge bouquet in his hand. “The florist just sent this over, with the bill,” he murmured behind his hand. “I’ll have it—er—thrown on at the end of the trial scene, eh?” “No, don’t throw it on,” said the leading lady. “Let an usher hand it up. I want to use it all this week.” [Launceston Examiner (Tasmania), Wednesday, August 18, 1909, page 7; the Queenslander (Brisbane), Saturday, July 24, 1909, page 47; the North Western Advocate and the Emu Bay Times (Tasmania), Saturday, August 7, 1909, page 2, and the Capricornian (Rockhampton, Queensland), Saturday, August 21, 1909, page 8.]

Hilarious? No doubt, but let us consider a number of ugly implications. The cynicism with which manager and leading lady are here shown to collude is further exaggerated by the fact that she was playing role of Portia in The Merchant of Venice, and that the plan was vulgarly to exploit their bouquet at the end of Act IV, scene i, the famous trial scene—as unworthy a lapse of taste, because it anticipates by almost two whole acts the end of the play and therefore upstages the rest of the cast, as the great size and expensiveness of the bouquet, which, in turn, underlies her determination to keep and recycle it... for a whole week. So the leading lady is extravagant but mean, vain but shrewd, evidently talented and successful enough to play Portia but certainly not above craving more and better cheap publicity—while, at the same time, confident that lowly front-of-house staff will gladly follow her orders, and collaborate with the deception. She is also as greedy for extravagant blooms as she is evidently unappreciative of their beauty; how do we presume they will look at the end of that busy long week? Leaving all that aside, there are two other important flecks of detail. In filling their order for this mendacious bouquet, which will masquerade as the tribute paid by a member of the lady’s adoring public, the florists were evidently not content to supply their flowers on account, but delivered them with the bill—in other words a vague but pointed insinuation that the leading lady and her furtive management (speaking behind his hand) might not be entirely reliable customers, and therefore not in possession of unclouded respectability. If there were any doubt about that, consider the source of the story: the manager himself, ungallantly and disloyally revealing his leading lady in a most unflattering light. There is, finally, the further implication that the basis upon which the manager enjoyed unfettered access to her dressing-room was at best unsavory. None of this could have been lost on an Edwardian reader alert to social nuance, and it is further telling that the joke was especially uproarious to an Australian public that was well accustomed to various comparable sneers being directed squarely at them from the heart of the imperial capital—as indeed, incredibly, very occasionally they still are. And now I must take out the rubbish.
Posted by Angus Trumble at 11:43 AM