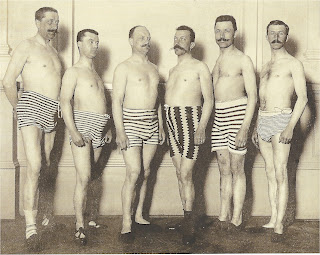 Last evening over an early dinner in New York a dear old friend visiting from Australia gave me this postcard which he found lately in a museum bookshop in Germany. The caption reads Schöner durch Streifen. Mitteleuropa um 1910. The first phrase is difficult to translate with equal concision, but surely means [men made more] beautiful by stripes, and presumably therefore drips with irony. This image of vital, vigorous, certainly self-styled manhood is made the more baffling by those frightful little shoes and, on the far left, the striped ankle socks as well. And surely the strangeness of the photograph arises from the total disjunction between the self-satisfaction, even pride, that these mixed-aged gentlemen swimmers obviously exhibit on the one hand, and, on the other, the almost inconceivable hideousness of the whole effect. One even wonders what occasion the photograph was specifically intended to mark. Mitteleuropa suggests that in the view of the publisher these gentlemen, so attired, were perhaps other than German nationals, but I am not so sure. Perhaps they could have been Austrian, or German-speaking subjects of the Austro-Hungarian Empire, for I fancy a Nachklang of this in certain of their Schnurrbärte, and a pleasing Sezession flavor in the Badebekleidung third from the right, but can there be any doubt as to the overriding impression that this weird image must belong to the Germanic Kulturbesitz, and to none other? One wonders, too, about the slightly wan Formalität of the Haltung: three and three facing inwards, Ja!, but the two on the right are looking in die falsche Richtung!!! The classicizing architektonischen Elementen which frame them seem congruent with a suite of Umkleiderräume in an Edwardian Turkish or electric bath establishment, though the absence of orientalisierenden Keramikfliesen suggests a more Spartan, almost preußischen Geschmack. This is to ignore the appalling cut of the garments themselves, and the total impracticality of the fabric, which, when fully immersed, must have assumed the character of so many portions of sodden blanket or bath mat. One shudders also at the mostly above-the-navel point of suspension, in other words what in couture circles one might describe as the Drapierung, to say nothing of the drawstrings, pert but limp, and inexplicably exposed; the slightly sinister bagginess of the nether portions, and the desperately ill effect of horizontal stripes upon the fuller figure. I cannot possibly accept that these were cavalry officers, railways officials, advanced psychiatric specialists, pupils, perhaps, of Dr. Freud, or civil engineers from Krupp or some other Konzern. Obviously they must have been senior executives of the Deutsch-Asiatische or one of other German banks. I am afraid there is no other possibility, and is it not curious to note how little bankers, in general, especially those with global reach, have evolved physically over the past 100 years? I fear that, were one to confiscate the drab, dark and unimaginative suitings from those bankers who currently inhabit certain boardrooms high above Wall Street, and substitute sensible German Badebekleidung, this is most probably what they would still look like. Hardly reassuring in these dark days of economic sluggishness but nevertheless, as the Hon. Paul Keating has remarked on more than one occasion lately, a vital key to understanding global finance is to grasp that most bankers are pretty ordinary.
Posted by Angus Trumble at 4:18 PM