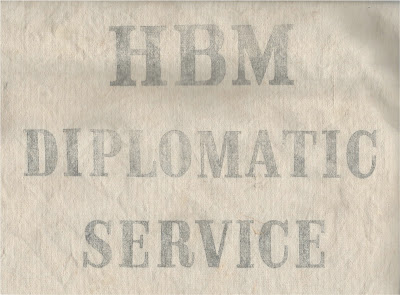 I cannot now recall how I came into possession of an empty British diplomatic bag, but I fancy Charlie Curwen gave it to me more than twenty years ago. I must remember to ask him. It is a fine buff calico model, with four pairs of brass eyelets along the top for ease of fastening with a lead seal; the faded impresa HBM—Her Brittanic Majesty’s—DIPLOMATIC SERVICE, and the number 2 floating up at the top left-hand corner. Perhaps this indicates some second-class designation as might befit documents destined for a colonial outpost, but why then resort to the diplomatic pouch in the first place? Though scuffed in places—the evidence of rough handling at Cairo, Addis Ababa, or the Porte, or else a leaky corner of the freight depot at Croydon—the bag is perfectly intact and could easily resume service, such is the quality of the stitching—indestructible. Until I discover a secure method of restoring it to the Foreign Office, I shall continue to use my diplomatic bag for loose change, of which there is a surfeit in the United States. It is also a much cherished reminder that communications between the Foreign and Commonwealth Office in Whitehall and Government House, Melbourne, must once have been conducted through diplomatic channels, just as, even in 1986, my own late and much lamented Governor, Dr. J. Davis McCaughey, A.C., was appointed by letters patent from the Queen that were counter-signed by Sir Geoffrey Howe, the Foreign (and Commonwealth) Secretary, a fact that would surprise most Australians. That my bag ended its last journey at Government House, Melbourne, suggests that the return communiqué was entrusted to more conventional post or telecommunications. I recall reading somewhere years ago that between the wars the diplomatic pouch was used by some officials to bypass H.M. customs and excise, and that a traffic in gowns and accessories from Paris couturiers, upon which duty was otherwise payable, provided much of the padding that surrounded official communications to the Foreign Office. I cannot imagine that this was true for more than a few second secretaries struggling with a flock of daughters, and therefore I suspect this was a figment of the imagination of Evelyn Waugh or Nancy Mitford, yet I suppose there existed the possibility of abuse. However, you would need to be confident that the bag would end up in the right hands, and that one’s motives for shuttling from a British legation to the Foreign Office pale pink tulle, the finest-quality lace smalls (hand-stitched by French nuns), or elegant high-heeled shoes were sufficiently innocuous, although I suppose there could be in this a rich seam of comedy.
Posted by Angus Trumble at 10:48 AM