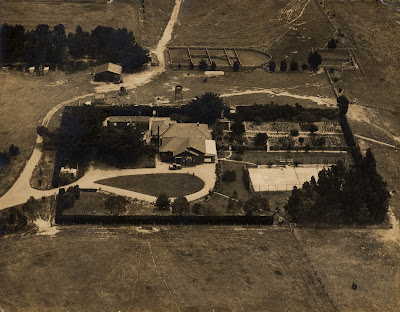 Mum again, at around the age of eight or nine:

We always went for a walk with the governess in the afternoon, usually along the railway line which ran in front of Raeshaw. There was only one train a day. Sometimes we would see some rail gangers on a push-me-pull-you trolley riding along the track to check the sleepers. In the spring it was a good place for wildflowers: bachelors’ buttons, egg and bacon, bluebells, etc. If we walked back towards Melbourne we would come to wattle and sheoak trees planted by Dad I think to where I was convinced there was a fairy ring. I was very fairy ring-minded right up to the time we left Gippsland and went to live in Geelong. I used to write letters to them and leave them at the ring and some kind person (probably Mongie) would leave replies written on gum leaves on the step outside the sleepout where we younger ones slept. David had his own room in a small hut outside the house, approached through the vegetable garden I think. The smell of Cootamundra wattle still takes me back to those walks. The ring was formed by toadstools spreading spoor ever outwards and had a mossy floor. Very authentic to my way of thinking!

I used to write letters to the fairies and leave them presents of cups made out of silver paper. They used to write back on gum leaves which was terribly exciting. I remember clearly finding one such note outside our sleepout door on the step one morning. It said that the fairies were going away for a holiday but would return some day. Funnily enough our dearest aunt (Mongie) who had been staying with us, left that day too, but I never twigged.

There is a reason for these two versions. Twice Mum went through the exercise of committing her childhood recollections to paper, beginning in the early 1990s. Because she mislaid the original notebook, with characteristic patience and determination she sat down not so long before she died and wrote it all again. The two books are remarkably alike, in both content and arrangement. She must have had a very clear memory of what she wrote the first time, or else she followed similar processes of retrieval that led her in essentially the same directions. Still, there are telling differences. The second book contains much that was prompted by conversations with Uncle John, who was by then living back in Melbourne and ailing. It is also more squarely addressed to Nick, who supplied the new notebook. And there are occasional hints that by then Mum was aware that she did not have much time left. The arthritis in her hands was giving her trouble, so the entries are briefer. When the family went for the interment of Uncle John’s ashes under a tree on the edge of the oval at Geelong College, Mum was reluctantly persuaded to take that opportunity to re-visit Raith and 188 Noble Street, the two Borthwick family homes in Geelong:

The day was very successful and I felt that John would have felt at home where he was buried. I hope so. On the whole, though, the hunt through what is now suburbia to find Raith confirmed my belief that, on the whole, it is better not to go back. 188 Noble Street was bad enough, but Raith was quite depressing. It looked so different to what I remember. It was no use asking me for street names as there were very few streets and our address was simply Raith, Herne Hill, Newtown, Geelong. The cypress hedge was intact to protect the house and garden from the tearing westerlies. The cement works at Fyansford was very much smaller and invisible from the garden. 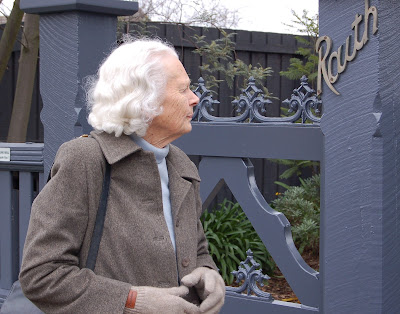 Poor old Mum. She was quite right. It is better not to go back, yet despite her better judgment I usually do.
Posted by Angus Trumble at 12:45 PM