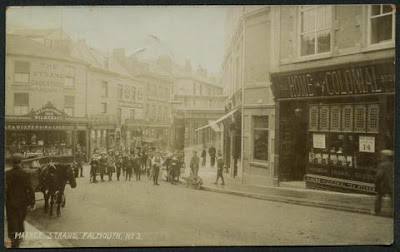 The Daubuz family were Huguenot refugees from France. According to Susan E. Gay (Old Falmouth: The Story of the Town from the Days of the Killigrews to the Earliest Part of the 19th Century, London: Headley Brothers, 1903, p. 74):

Theophilus Daubuz, of Huguenot descent, came to Falmouth about 1730–1, and lived in a house belonging to Dr. Russell, of Truro, (presumably one of the Russells of Falmouth), situated, I believe, at or near the Market Strand. In 1763 he obtained land near Arwenack, with a view of building a “handsome house, and stable, with a small garden,” but possibly changed his plans, as no house of that date seems to have been erected there. Among other things Mr. Daubuz started in 1744 a privateer, but after a two months cruise, “in which she took only two Prizes and pillaged a little Town on ye Coast of Spain, ye whole booty not worth a £1,000,” she returned. This remark shows the profitable nature of privateering, and the reason why it was so much indulged in by all nations, the old raiding instincts of our forefathers not having wholly died out in the greater enlightenment of our own days. In the same year Mr. Daubuz married a “Miss Greene, a Grand-daughter of Mr. Jones, about half his age,” who died eight weeks after the wedding. He projected a Distillery Company, the distiller being a friend or relation, but I do not know if it succeeded. One of the Daubuz family lived in Falmouth as late as 1788.

Evidently the distillery did succeed, thanks to Miss Greene’s usefully unspent dowry; the proceeds of that brief visit to that little town on the coast of Spain, and the shrewd investment in land at Arwenack. Subsequent generations were comfortably prosperous.

The first generation of Daubuzes that concerns us is that of Lewis Charles Daubuz, whose delightful obituary appeared in 1840 in the Gentleman’s Magazine:

The greater part of his long and useful life was spent in Truro [Cornwall], where he must have resided not less than half a century; but his birth-place we believe was Falmouth. Not many years since he succeeded to a large property, by the will of his younger brother, John [Theophilus] Daubuz, esq. who, dying a bachelor, bequeathed his mansion and estate of Leyton, to his second sister, the late Miss Anne Daubuz, for her life; a large freehold property, with a handsome country residence in Sussex, to his eldest nephew, James Daubuz, esq. and the great bulk of his chattel property, with the reversion of Leyton, to the gentleman now deceased. When Mr. Daubuz quitted Truro for Leyton, some time after the death of his sister Miss Anne Daubuz, the most sincere and general regret was expressed by the inhabitants,—for at the age of more than fourscore years he retained no small remains of the energy and sprightliness of youth; and all classes were fully sensible of the great loss they were about to sustain. In person he so remarkably resembled the Duke of Wellington, that he was often, when among strangers, mistaken for His Grace, whom he likewise, in a different sphere, no less resembled in loyalty and devotion to his country. Connected extensively in business, from early life, with distant quarters of the globe, he possessed the means of better information than most men; and few have brought a sounder judgment to bear upon the various interests, whether political or commercial, of the British Empire. In his intercourse with the private circle of his friends, he was uniformly cheerful and communicative: he was the active promoter of every Institution which he deemed for the benefit of society, particularly of those established for the propagation of sound religion; and, in addition to his liberal subscription to public charities, he was the never-failing friend, privately and unostentatiously, of the fatherless and widows in their affliction; he was worthy, in short, of the stock from whence he sprang, which was that of a French Protestant family of great respectability, who were cruelly compelled, with thousands of sufferers in the same religious cause, to quit their native country, on the perfidious revocation of the Edict of Nantes, by that haughty and bigoted tyrant, Louis the Fourteenth. The Rev. Charles Daubuz, Vicar of Brotherton, Cheshire, and author of a learned dissertation on the Prophecies [Caroli Daubuz presbyteri & A.M. Pro testimonio Flavii Josephi de Jesu Christo libri duo: quorum priore de variâ ejus fortunò usuque, necnon auctoris consilio in eo conscribendo pertractatur, posteriore verò ex stylo ac dicendi modo & sensu, ejus veritas comprobatur / cum præfatione Johannis Ernesti Grabe. Londini [London]: Typis W. B. impensis verò R. Sare in Porticu Hospitii Grayensis Australi, 1706.], was, we believe, Mr. Daubuz’s grandfather; his great work is still appealed to as of the highest authority, and he is quoted by D’Oyley [sic] and Mant, as among the most eminent commentators on the Bible [Holy Bible...arranged by George D’Oyly and Richard Mant. London: 1813]. Mr. Daubuz married Wilmot, the youngest but one of the five extraordinarily beautiful daughters of William Arundell Harris, esq., of Keneggie, near Penzance, grandfather of the present Mr. [W. A. H.] Arundell, of Lifton Park,—this most charitable and amiable lady died at Truro many years since. His eldest sister, Mrs. Magdalen Daubuz, is still living in the neighbourhood of Leyton, full of years and good deeds. Mr. Daubuz has also left behind him four sons and two daughters, with several grandchildren.

I find it heartening, even touching, to know that the Reverend John Claude Daubuz, sometime Rector of Creed in the Diocese of Truro was the third son of Wilmot, that “most charitable and amiable” second-youngest daughter of Mr. Harris, and that in her prime, like her four sisters, she was extraordinarily beautiful.
Posted by Angus Trumble at 10:18 AM