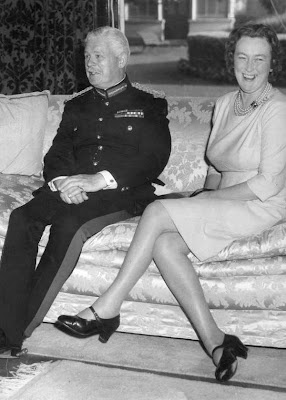 I was fortunate during my brief tenure in the late 1980s as an aide at Government House, Melbourne, to have been assigned for a few days the responsibility of being in attendance upon Major-General Sir Rohan Delacombe, K.C.M.G., K.B.E., C.B., D.S.O., one of Davis’s predecessors as Governor of Victoria, and from 1959 to 1962, at the very height of the Cold War, commander of the British military forces in Berlin. He and Lady Delacombe were by 1989 very elderly, but utterly charming, and absolutely undeterred by having at their disposal as youthful and inexperienced a civilian attendant as me. Their visit, which I think was a great success, coincided with the running of the Melbourne Cup, and one of my tasks on that exciting day was discreetly to seek for Sir Rohan reliable “information” in advance of placing for him extremely modest bets. Alas, I do not think I came up trumps, because, somewhat counter-intuitively, reliable information is hard to come by in the Committee Room of the Victoria Racing Club, especially from wily old punters such as Sir Henry Bolte, whom I vividly recall propping up the bar on that occasion. Nevertheless the General thoroughly enjoyed himself that day.

Sir Rohan was known affectionately to his staff as “Jumbo,” and to many other people besides. This appears to have been in conformity with the widespread practice of British troops during World War II, namely to confer upon their commanding officers affectionate, indeed sometimes baffling nicknames. A certain number of these originated among relatively junior comrades-at-arms during the previous World War, but plenty did not. Jumbo Delacombe was therefore a relative late-comer to the tight-knit constituency that included (but was not by any means restricted to) “Squeaker” Curtis, “Bubbles” Barker, “Pip” Roberts, “Strafer” Gott, “Twinkletoes” Essame, “Monkey” Morgan, “Dolly” de Fonblanque, “Windy” Gale, “Pug” Ismay, “Jorrocks” Horrocks, “Poppy” Flanders, “Fairy” Fairhurst, not to mention “Pickles” Sodhi of the 61st. Cavalry, “Binny” Shergill, “Rusty” Rockingham, “Tiger” Urquhart, and others known simply as “Loony,” “Tripe,” “Oxo,” “The Oat,” “Spud,” “Dog-face,” “Pumpkin,” “Bimbo,” and “The Hawk.” I am not quite sure how Sir Rohan Delacombe came by the nickname Jumbo. He was never, I think, a conspicuously large man, though his military bearing and meticulously-maintained moustaches were still mightily evident, even in his nineties. How very lucky I was to have been given the privilege of serving him, even only for a few precious days.
Posted by Angus Trumble at 2:10 PM