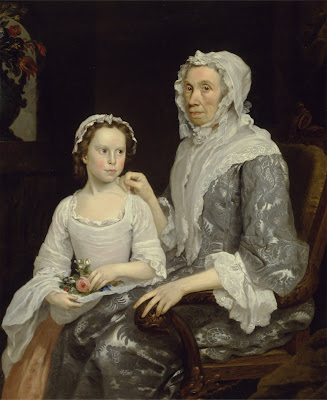 Little more is known about the provincial Hampshire portrait painter George Beare than what appeared in his brief obituary in the Salisbury Journal on May 22, 1749: “Last week died near Andover, Hants., Mr. Beare, lately an eminent Face Painter in this City.” Judging from the relatively small number of portraits that have yet been identified, a little shy of fifty, none predating 1743, this double portrait is his masterpiece, exploiting to the fullest extent the sympathetic contrast in age between a grandmother, elaborately dressed in gray damask and lace, and the freshness and simplicity of the granddaughter on whose shoulder the old woman rests her right hand. Together with that telling gesture, the double portrait of a grandmother and granddaughter, in which a degree of emphasis is placed upon family likeness, may imply here the role of guardian in lieu of a conspicuously absent mother, presumably dead. Beare’s painting here at Yale, which must date from 1747, represents a subtle shift in taste from the English Rococo idiom, as practiced by Francis Hayman, Philippe Mercier and others, toward the more robust English style of forthright naturalism we associate with Joseph Highmore and William Hogarth. The sitters may have been members of the Grove family of Ferne House, at Berwick St. John in Wiltshire, but no securely verifiable identification has yet been possible.

One of the things we do know about George Beare was that in 1746 he wrote a letter to one of his sitters, Sir Alexander Powell, politely asking to borrow that gentleman’s claret-colored waistcoat so that he could paint it accurately, and without unnecessarily detaining him with an unnecessarily tedious string of follow-up sittings. He also offered Sir Alexander his choice of top coat to harmonize, and sought his approval of the work already done. This tells us quite a lot. Beare evidently could not afford to keep a convenient wardrobe in his Salisbury studio with which to tackle this problem. Successful metropolitan portrait painters such as Sir Joshua Reynolds did, and indeed we see the same dresses, in other words certain extravagant studio props, recurring slightly indelicately in many of his portraits of middling gentlewomen and actresses. But Beare’s request sheds still more light on the immediate set of circumstances. This was evidently not an issue of color. Artists can be very good at replicating hue, or at least coping without direct access to a waistcoat of this or that particular plum, yellow, or crimson. Yet this garment must have been an especially impressive one, made either from some richly woven silk brocade, not unlike the material we see in this old lady’s dress, or else elaborately embroidered. So Beare needed to have it in front of him. And this may well have been dictated by the wishes of his gentleman-sitter, who might not have owned very many such aspirational garments with which to present himself in splendor. (In the end, according to Nigel Surry in the ODNB, he decided upon a plain, stone grey-colored coat, a conservative but by no means unfortunate choice.) The same may have been true of the delicious oyster-colored gown we see here; this was a precious garment worn only for the most important occasions, and cared for during the gradually lengthening periods in between with much of the tenacity, zeal, good sense, and prudence that are chiseled into the contour of the lady’s chin, and also sparkle in her eyes, as yet undimmed by old age (a particularly engaging quality in the very old of which those of us in the grip of middle age become increasingly aware and respectful). I like to imagine that this gown was made from a precious bolt of Italian silk brocade that the old lady brought as a significant portion of her dowry when fifty years before, early in the reign of Queen Anne, she married (for the first time?). And when that happened she cannot have been much more than a few years older than her granddaughter was when Beare painted this marvelous picture. It seems fatuous to say it, but to me there are few Georgian women more vividly alive in our collection than this old lady; how I would love to have been able to pay a call, take tea, and learn what shrewd things she had to say about goings on in the village, and the county. Though necessarily such observations were most probably in miniature, yet I suspect she missed very little, and in doing so exercised considerable powers of observation, and surely accumulated much wisdom.
Posted by Angus Trumble at 4:14 PM