Vale Earl and Countess of Hopetoun 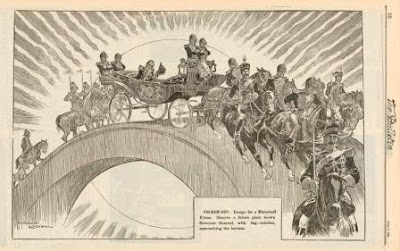 It was a consequence of accession of King Edward VII in 1901 that for the first time in several generations a king and queen consort, crowned together, provided a more compelling, even refreshing model than that of the long-widowed Queen Victoria for the routine performance of vice-regal duties in all British colonies, but especially in the wealthy dominions. While the Duke of Cornwall and York (the future King George V) personally represented King Edward at the opening of the first federal Parliament of Australia in Melbourne in May 1901, the king’s reserve powers (which were still considerable) routinely devolved to a new governor-general, the ailing Earl of Hopetoun, whose great personal wealth enabled him and the Countess to fulfill their social and political functions in what were perceived to be the wholly changed circumstances, indeed the reflected light of a new reign.
In fact, Lord Hopetoun made a succession of bad constitutional mistakes, not the least of which was the decision upon his own responsibility to appoint the wrong man (Sir Edmund Barton) to be first prime minister of Australia, and, coinciding almost exactly with the date on which the coronation was supposed to take place, the governor-general submitted his resignation to the king, stepped down, departed, and was soon afterwards promoted in the peerage as first Marquess of Linlithgow, the title his son carried with him much later into the viceroyalty of India.
A cartoon by the young Melbourne artist and illustrator Norman Lindsay (1879–1969) entitled “Frozen Out: Design for a Historical Frieze,” originally published in the unapologetically impertinent Sydney Bulletin, presents a vision of the splendor of Lord Hopetoun’s departure in an open landau, attended by liveried footmen and a large mounted escort. He clatters across a symbolical Japanese bridge, silhouetted by an immensely hot, rising antipodean sun à la Kuniyoshi. Trotting along behind is the quixotic governor-general’s Sancho Panza and successor for the time being, Hallam Tennyson, the son and successor in the peerage of the Poet Laureate, hitherto governor of South Australia. “Observe a future plain, brown Governor-General,” runs the caption, “with dog-outrider.”
This biting satire, which incidentally exploits the racist suspicion of Meiji ambitions in the Pacific, would have generated merely local interest and amusement, but its publication under license in the August issue of the London Review of Reviews—and as the culminating finale in a round-up feature of world cartoons entitled “Current History in Caricature”—brings the drawing into startling alignment with the events of coronation day, upon portions of which it might almost function as a direct and subversive commentary. Indeed, the text accompanying the London publication explicitly acknowledges that “The illness of the King caused a remarkable slump in cartoons on the Coronation. Excepting an occasional cartoon, such as that representing Death in the guise of a ‘monarch-murdered’ soldier from South Africa visiting the sick-bed of the King, the Continental press has been singularly free from anything to which a loyal subject could take offence.” Lindsay’s “Frozen Out” is the more conspicuous for its blunt reference to imperial display. The text commenting on it further implies that, Icarus-like, the Earl of Hopetoun had ascended too far into a sphere more properly occupied by the king alone:

Quite so.
Posted by Angus Trumble at 2:21 PM