All things are queer and opposite 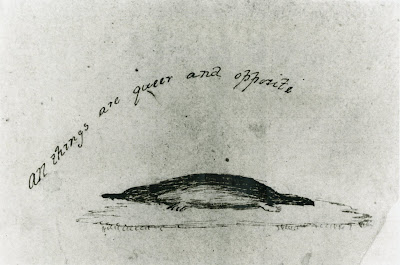 When I saw him lately in Melbourne, my colleague David Hansen, formerly senior curator of art at the Tasmanian Museum and Art Gallery in Hobart, gave me a reproduction of this marvelous drawing of a slightly squashed-looking duck-billed platypus with, looping over it, the neat longhand inscription: “All things are queer and opposite.” This was inscribed on the cover of the first minute book of the Tasmanian Society of Natural History, the direct institutional ancestor (via the Royal Society of Tasmania [1843]) of the T.M.A.G. At its foundation in 1839, the first society chose as its emblem the platypus, originally classified in 1800 as Ornithorhyncus paradoxus by the perplexed Johann Blumenbach, on the basis of a specimen furnished by Sir Joseph Banks—a term eventually altered to Ornithorhynchus anatinus, which means literally duck-like, bird-snouted creature. (Platypus, from the Greek, means flat-footed.) To this platypus emblem the society added a Latin motto: Quocunque aspicias hic paradoxus erit.
Upon returning to New Haven, Conn., I tried to find out where this motto originated, in what if any Classical source, or else adapted from what ancient, medieval, or even Renaissance model. None appears ever to have been proposed, so I made discreet inquiries. My learned colleagues Tristan Taylor and John Dillon, formerly of the Yale Department of Classics, have now proffered excellent advice which, with their permission, I am delighted to pass on here.
Quocunque aspicias hic paradoxus erit is certainly not a Classical quotation. Only one ancient author, the Augustan poet Ovid (43 B.C.–A.D. 17/18), is known to have combined the words “quocunque aspicias” or “quocunque aspiceres,” and he used the phrase twice in describing Tomis, from A.D. 8 his bleak place of exile in Scythia Minor on the Black Sea (modern Rumania): “quocunque aspicio nihil est, nisi Pontus et aer / fluctibus hic tumidus, nubibus ille minax,” that is, “In whatever direction I look, there is nothing except sea and air, one swollen with waves, the other menacing with clouds” (Tristia, 1.2.23–24), and “quocumque aspicias, campi cultore carentes / vastaque quae nemo vindicat arva iacent,” that is, “in whatever direction you look, fields lie lacking cultivation and vast fields no one claims” (Epistulae ex Ponto, 1.3.55–56). If the Tasmanian Society of Natural History composed its motto as a conscious allusion to Ovid—and the Vandiemonian setting might indeed suggest logical, if rather gloomy grounds for alluding to Tomis—they did it very well indeed, because Quocunque aspicias hic paradoxus erit parses in elegiac meter; specifically as the second line of a carefully crafted couplet. The long and short syllables of the motto are: _ _ _ . . _ _ . . _ . . _ (provided we elide the -que with asp-, and treat them as one syllable, specifically the third long one.) This is skilled Latin poetic composition.
As for the translation, paradoxus is masculine, so it must refer to the platypus itself because a paradox in Latin is otherwise neuter, i.e. paradoxum. It follows, then, that the word hic is not an adverb meaning “here” but a masculine singular demonstrative pronoun, “this (creature),” referring to the platypus, agreeing thus with paradoxus. Literally, then, the motto translates as “Whichever way you look [at it], this [creature] is baffling,” that is, from the front or from the back. Smoothing out the awkward English, and taking into account the fact that the Classical Latin adjective paradoxus means something closer to baffling, strange, or surprising than literally paradoxical, a neater translation might be: “Whichever way you look at him, this fellow will surprise.” So who on earth in Hobart Town was the composer of this fragment of Latin elegy, and possibly a clever pasticheur of Ovid as well? One should never underestimate the sophistication of nineteenth-century British colonists’ Latin, nor indeed that of the estimable Tristan Taylor and John Dillon, to whom I am indebted for these insights. Even so: All things are queer and opposite, so let us be gay.
Posted by Angus Trumble at 4:35 PM