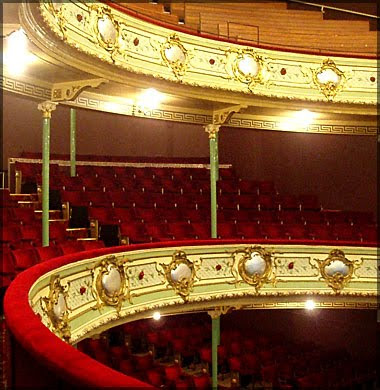 And what of the “grand” concert program assembled by M. and Mme. Henri Gautrot for the Theatre Royal, Hobart Town (above), on Tuesday, May 28, 1839? Fortunately it was published in great detail in the previous Friday’s issue of the Courier, exactly one week after the Gautrots’ arrival from Sydney aboard the Marian Watson (May 17), and is predictably behaviour-softening, and also Janus-like: “GRAND CONCERT. (UNDER DISTINGUISHED [i.e. vice-regal] PATRONAGE.) MONSIEUR AND MADAME GAUTROT HAVE the honour to announce that their Concert will take place on Tuesday next, the 28th May, 1839, at the Theatre Royal, Campbell-street. By the kind permission of Lieutenant-Colonel [the future General Sir William Henry] Elliott [K.C.B., 1792–1874], the Band of the 51st [2nd Yorkshire, West Riding, The Queen’s Own Light Infantry] Regiment will attend. PART I. Overture—Militaire. 1.—Air, Il Barbiere de Seviglia [sic, 1816]—‘Una voce [poco fa],’ [Gioacchino] Rossini: Madame Gautrot. 2.—Variations on the Violin, Gautrot: Monsieur Gautrot. 3.—Air from Tancredi [1913], Rossini: Madame Gautrot. 4.—Solo, Clarionet: M. [Joseph] Reichenberg [1790–1851]. 5.—Air, Français (‘Le Plaisir des Dames’), [Daniel-François-Esprit] Auber [1782–1871]: Madame Gautrot. PART II. Symphony—Militaire. 1.—‘O Dolce Concento,’ with variations, composed by Mons. Gautrot: Madame Gautrot. 2.—Quartette, Instrumental. 3. Air with variations, [Charles-Auguste] de Bériot [1802–1870]: Monsieur Gautrot. 4.—Air, Français, from [Le] Pré au Clercs, [Ferdinand] Hérold [1791–1833]: Monsieur and Madame Gautrot. Finale—‘Rule, Britannia!’ [by Thomas Arne, 1740]. Mr. Leffler will preside at the Pianoforte.” Janus-like, I suppose, because of the nice balance achieved by M. and Mme. Gautrot between martial and pastoral, Italian and French, new and old, vocal and instrumental, comic and tragic—Le Pré au clercs, with its cumbersome libretto by François-Antoine-Eugène de Planard (leaning heavily upon Prosper Mérimée’s Chronique du temps de Charles IX, 1829), deals with the massacre de la Saint-Barthélemy (1572), and its juxtaposition with the rousing, limitlessly popular verses of James Thomson in Arne’s setting of “Rule, Britannia!” could not be more pointed, or satisfactory. Not, I think, by coincidence did Mme. Gautrot perform the “andante de Mozart ‘O Dolce Concento’” at the Royal Victoria Theatre in Sydney two months earlier (March 22, 1839), which, opening as it does the second half of this program, hoists a conspicuous question mark over the words “composed by Mons. Gautrot,” though perhaps this referred to the variations and not to the aria. The instrumental “quartette” that follows is somewhat tantilizing, presumably for pianoforte (in fact Mrs. Logan stepped in for Mr. Leffler), violin (M. Gautrot), clarinet (instead of viola, Mr. Reichenberg), and almost certainly cello, but there is no clue as to the identity of the fourth player—perhaps this was one of Colonel Elliott’s supernumaries, or just possibly Madame Gautrot. Insomma, this is platypus programming, definitely queer, and deliberately, delightfully opposite.
Posted by Angus Trumble at 8:43 AM