All things are queer and opposite 3 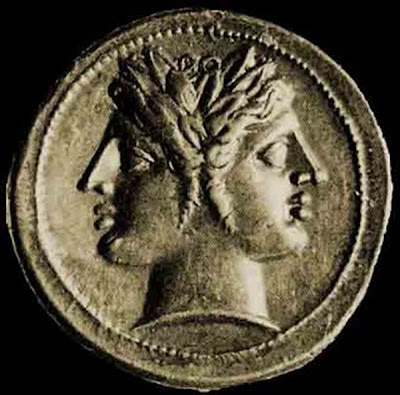 Janus was the Roman god of beginnings and transitions, thence also of gates, doors, doorways, endings, and time. He was often represented with two heads, facing in opposite directions, generally east and west (above). Symbolically they were thought to look simultaneously into the future and the past, back at the last year and forward at the new.
This interpretation of Janus as the god of beginning and end, of past and future, and of transition, was explained etymologically: Ovid (Fasti, I.126–127), Macrobius (Saturnalia, I, 9, 11), and Cicero (De Natura Deorum, II.67) all suggested that the name Janus was ultimately derived from the Latin verb ire (to go), hence the concept of Janus the colonist, to which James Ross of Paraclete, Knocklofty, referred in his Hobart Town Almanack and Van Diemen’s Land Annual for 1835.
As well, it was widely understood from the Res Gestae and other ancient sources that by convention the doors of the Temple of Janus in the Roman Forum were closed in times of peace (a very unusual set of circumstances), and propped open in times of war. The Hobart Town Courier got into a slight muddle over this, when on Friday, May 24, 1839, it reported that “The Theatre [Royal, on the corner of Campbell and Sackville Streets], which has so long and so obstinately remained closed to amusement, is, we are happy to perceive, at length about to open its doors—like the Temple of Janus—to concord [sic]. This is promised to us next week by Mons[ieur]. and Madame Gautrot, two distinguished artistes, who have just arrived from Sydney, and who have announced their intention of giving a Concert next Tuesday. The lovers of vocal and instrumental music are promised a rich treat upon the occasion; and we are confident , that as such visits to our colony are like those of angels, ‘few and far between,’ [cfr. Thomas Campbell, 1777–1844, The Pleasures of Hope, Edinburgh: Printed for Mundell & Son; and for Longman & Rees, and J. Wright, London, 1799, ii.375: “What though my wingèd hours of bliss have been, / Like angel-visits, few and far between?”] the attendance will in every way correspond to the expectations of Mons[ieur]. Gautrot, whose reputation as a violin-player, is understood to be of the very highest order.”
The following week, an account of what took place at the concert took up and actually corrected the mistake about the doors of the Temple of Janus (Hobart Town Courier, Friday, May 31, 1839):

The Concert of Monsieur and Madame Gautrot took place at the Theatre on Tuesday evening last, and as if to punish us for making a mistake about his temple and to vindicate his offended deity, that two-headed gentleman Janus had nearly afforded us a practical illustration of the absence of concord, which we had predicted as likely to attend upon the doors of the Theatre being thrown open, and convinced us that a more safe remedy to have produced any such effect would (in one sense at least) have been to have kept them closed. We were led to this conclusion by a very extraordinary scene which was enacted in the boxes previously to the commencement of the performance. The plot was as follows:— The box appropriated for the reception of the Governor [Sir John Franklin] and his party was one in the centre of the tier, the front row of which a party of young ladies, disappointed in procuring seats in another part of the Theatre, unhesitatingly took possession. The circumstance excited some slight surprise, and when at length it was announced that His Excellency had arrived, all eyes were most anxiously directed to the fair objects of attraction, who were determined to dispute the possession of the Governor’s box. In vain were the luminaries borne before the Lieutenant-Governor—in vain did Monsieur Gautrot herald His Excellency with all that innate politeness which distinguishes the French character, while unspeakable surprise agitated his features—in vain the imploring looks of the Aide-de-Camp and the ardent solicitations of friends—all were exhausted upon the tacit indifference of the party who remained in the full pride of the victory which they had so gracefully achieved. We are informed that there was a gentleman of the party also in the box, who exhibited a similar spirit of independence and indifference to all entreaty. As if to make the conduct the more conspicuous, on the box itself was seen the inscription ‘EMOLLIT MORES’ in large letters, which we may translate for the benefit of those whom it most concerns, into the REFINEMENT of manners! After pausing for some time at the top of the box, with Lady Pedder [wife of Chief-Justice Sir John Pedder] on his arm, His Excellency turned round to a different part of the Theatre, when, after some little confusion, and a clatter of seats, we had at length the satisfaction of seeing him occupy a position whence he acknowledged the warm greetings of the audience. We are willing to believe that some unfortunate mistake must have occurred, for otherwise a more outrageous insult was never offered to the representative of royalty. Had His Excellency left the Theatre, we are quite sure he would have been accompanied by the majority of persons present; but not wishing to prejudice the interests of Monsieur and Madame Gautrot, he consented to take his seat in another box, and in so doing showed himself superior to any feeling of temporary annoyance, which so gross a violation of all decorum was calculated to excite. The vulgar triumph was thus disappointed, and the audience evinced their sense of the treatment by most enthusiastically and repeatedly cheering His Excellency at the close of the evening’s entertainment. There was but one sentiment pervading all present, whether politically opposed, or otherwise, to His Excellency’s government; and if we lament that such an occurrence took place, our regret is materially diminished by the universal expression of public feeling which it called forth. The exception is said to prove the rule, and it never did more effectually than in the present instance. Thus much concerning this part of the performance. We are happy to revert with more satisfaction to the voice of Madame and the violin of Monsieur Gautrot. Madame sings with great taste, but the compass of her voice is too powerful for a small theatre. Some of the tones are exceedingly rich, but as she proceeds it seems to want more melody and modulation, and its great power in so limited a space astonishes sometimes more than it delights. We were, however, much gratified by several of her performances, which we hope to see repeated before her departure from this colony, as they serve to remind us that we are not altogether excluded from the excellencies of the old world. Madame Gautrot was applauded enthusiastically throughout the evening, and one or two airs which she sung were vigorously encored. With regard to Monsieur Gautrot—in his case, music may be said most fairly to be married to song. His execution on the violin is rapid, and at the same time possessing that ease which denotes a thorough command over the instrument. We must not omit to mention, that in the absence of Mr. Leffler, who was to have presided over the pianoforte, Mrs. Logan consented at once to relieve Monsieur and Madame Gautrot from the embarrassment in which they must otherwise have been placed. The audience failed not to appreciate the kindness, and she was led on the stage amidst universal applause. Through the courtesy of Lieutenant-Colonel [the future General Sir William Henry] Elliott [K.C.B., 1792–1874], the fine band of the 51st [2nd Yorkshire, West Riding, The Queen’s Own Light Infantry Regiment] was permitted to be present, and relieved the interludes with several delightful pieces of music.

“Emollit mores,” I need hardly add, is a motto plucked directly from Ovid (Pontics, II.9.48): “Adde quod ingenuas didicisse fideliter artes / emollit mores nec sinit esse feros,” that is, “[Add that] faithful application to the arts softens behaviour, and does not permit barbarism.” Readers of the Hobart Town Courier who knew their Roman religion and their Ovid so well could not have been surprised, nor fazed, but only delighted by the decision in 1839 of the fledgling Tasmanian Society of Natural History to adopt the distinctly Janus-like platypus as its emblem, together with the Ovid-leaning motto “Quocunque aspicias hic paradoxus erit, ” for, as is now wholly clear, all things Vandiemonian were definitely queer, and determinedly opposite.
Posted by Angus Trumble at 1:45 PM