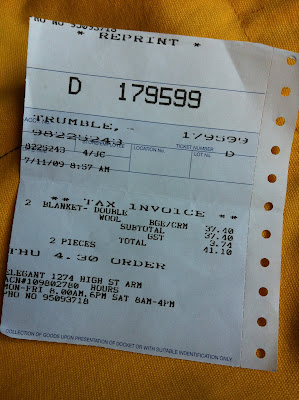 After she died nearly sixteen months ago, Mum left behind very few loose ends. Helen made a lifetime’s habit of throwing things away, and although it fell to Nick and Simon, mostly, to dispose of the contents of her house, when the time came to do that ghastly job it was reasonably straightforward. Yet anyone who has dealt with the estate of an elderly parent will know that matters small and large continue to crop up for many months, extending some considerable distance beyond the canonical executor’s year: the melancholy card or telephone call from a distant but affectionate country cousin who for some reason flew under the radar screen; Dad’s apparently missing Pacific campaign medals that eventually turned up in the bottom drawer of an old desk, raising the further question as to what on earth to do with them; a dry cleaners’ docket carefully tucked into Mum’s purse, behind her driver’s licence—still current but somehow overlooked. Last week we discovered that docket. It relates to two good quality woolen blankets, part of the last spring clean, which, only a matter of days before she died, Mum took up to the dry cleaner near the corner of High Street and Glenferrie Road. It must have taken some considerable physical effort, and that she carried on so heroically with such humdrum domestic chores is entirely characteristic of her sterling, undaunted personality. Anyhow, we decided we should probably inquire about the blankets, knowing that, having been unclaimed for so long, in all probability they would in all likelihood have been disposed of. 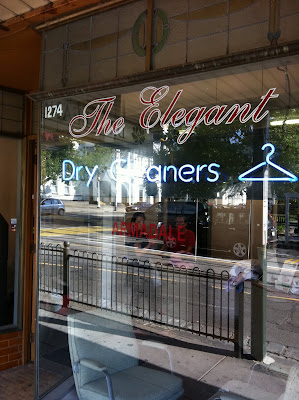 Mairse rang The Elegant Dry Cleaners (9509 3718), and to our amazement the proprietor still had them. Her name is Janine, and, it turns out that after Mum failed to collect them promptly, as was her habit, Janine sensed that something must have happened to her. Mum was a good customer for many years, businesslike and formal and well-organized. There was no small talk. There are dry cleaners that are nearer and cheaper, but they don’t do as good a job. Mum definitely preferred The Elegant Dry Cleaners. At the time, Janine started ringing selected Trumbles in the telephone directory, and even contacted Telstra, who declined to make further inquiries, but hers is a busy concern, the weeks sped by, and the matter drifted, as such matters do. Still, she held onto Mum’s blankets. Last Tuesday I went to collect and pay for them, and Janine leaped from behind the counter, gave me a hug, told me the whole story, decried the unhelpfulness of Telstra, and asked me to convey her condolences to the rest of the family. She fetched the blankets from somewhere distant, and told me how to peel the plastic off so as to protect them from the layer of sixteen months’ accumulation of dust, a good deal of which ended up down the front of her red sweater. Presently they’ll go to Metung, and replace a couple of the ancient, sixty, seventy, eighty year-old stained monstrosities in the middle bedroom. These days we hear a lot about customer loyalty, as if the concept is an exciting invention of the modern retail trade, but with Mum it was ingrained, just as for all those years and years she bought meat from nobody other than Mr. Matthewson the butcher. But what you don’t hear quite as much about is the corresponding loyalty the good customer earns from her hard-working local dry cleaners. I thanked Janine, and shook her hand. This felt strangely final, especially because only a few days earlier, the previous Sunday, after the 8 o’clock service, we deposited Mum’s ashes not fifty paces away, under a fine cherry tree in the Memorial Garden at St. George’s in Glenferrie Road. Final, yes, but what more could I do, except to commend to anyone who is prepared to listen the outstanding worth of The Elegant Dry Cleaners of 1274, High Street, Armadale?