The enduring qualities of local stone 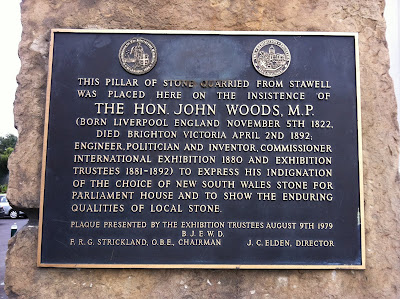 On my perambulation through the Carlton Gardens last week, I came across a little monument that captures perfectly the puffiness and pride of colonial Victoria. It is a tall, skinny, rough-hewn monolith discreetly placed near the north side of the eastern facade of the Royal Exhibition Building, to which is affixed a bronze plaque with the following, curiously drafted inscription: “This pillar of stone quarried from Stawell was placed here on [sic] the insistence of the Hon. John Woods, M.P. (born Liverpool, England, November 5th 1822; died Brighton, Victoria, April 2nd 1892; engineer, politician and inventor, commissioner International Exhibition 1880 and Exhibition Trustees 1881–1892) to express his indignation of [sic] the choice of New South Wales stone for Parliament House and to show the enduring qualities of local stone. Plaque presented by the Exhibition Trustees, August 9th 1979, B.J.E.W.D. F. R. G. Strickland, O.B.E., Chairman, J. C. Elden, Director.”

I wonder what “B.J.E.W.D.” stands for—that W.D. on the end could be something like “works department,” or maybe its the acronym for the architects, builder, or civil engineer who fixed it up in time for the centenary in 1980, and the visit of Princess Alexandra. I must find out.

Anyhow, there are many wonderful things about Victoria, and maybe even grounds for believing that certain of them compete successfully against the corresponding or rival claims of neighboring states. However, throughout our brief history such convictions have tended to give way to parochialism pure and simple, and in some respects they still do. I notice this for the simple reason that I have not lived in Victoria for seventeen years, and it has been a happy consequence of living elsewhere that I have come to know the rest of the country a little better, I suspect, than if I had stayed put. So, I am thinking to myself: Where else in the whole wide world would “the enduring qualities of local stone” trump those creamy, soft, fine-grained, honey-colored sandstones that are the glory of colonial architecture in New South Wales, Van Diemen’s Land, and South Australia? These would have offered Melbourne architects almost limitless possibilities had there been no overriding belief that the local product was superior, or that bluestone was ipso facto better—bluestone, the epitome of forlorn volcanic greyness, the geological equivalent of catarrh, scattered so plentifully across the high plains of Central Victoria. Sullen, lumpy boulders of it broke axles, maimed horses, and provided excellent cover for criminals during the Gold Rush, and in due course poured into stonemasons’ yards for crude, busy rustication (because it is both crumbly and hard, dense but full of bubbles, scratchy in texture but not crystalline, and innately dull) before being turned into prisons, cemetery out-buildings, storm drains, presbyteries, and Church of England boys’ schools. Admittedly, the Stawell product seems a little more promising, though it has not weathered very well. No, Mount Gambier or, better, Sydney and Hawkesbury sandstones are so much more beautiful, and, pace my beloved Melbourne, to point this out with particular emphasis does not constitute an act of treachery.

Posted by Angus Trumble at 6:27 AM