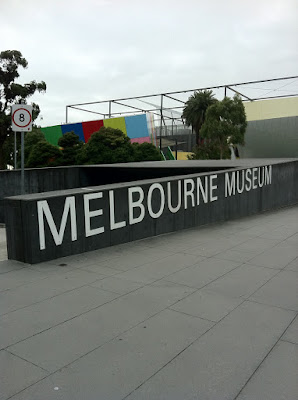 When, I wonder, was the old Museum of Victoria turned into the rather different, definitely expedient, and colossally self-important “Melbourne Museum”? The name is not in any way an adequate descriptor of the spread and character of the collections, nor indeed the sources of its funding both now and in the past, but I suppose resistance is futile, as usual. Whilst waiting to enter the other morning, however, and ruminating upon the demise of the old-style natural history museum, I did a turn around the surrounding Carlton Gardens, and came across this extraordinarily curious lantern and drinking fountain, set back from Nicholson Street, right in front of the east facade of the Royal Exhibition Building. 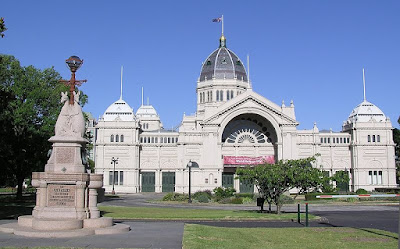 This public amenity is a glorious hybrid—the lantern supported by a group of affectionate, overweight kangaroos, carved out of a single piece of pink Aberdeen granite... 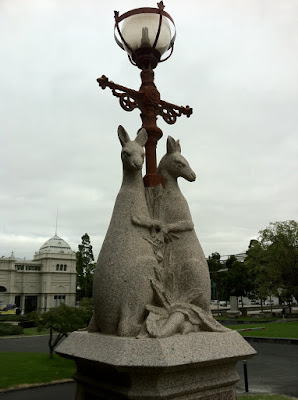 with a supporting patch... 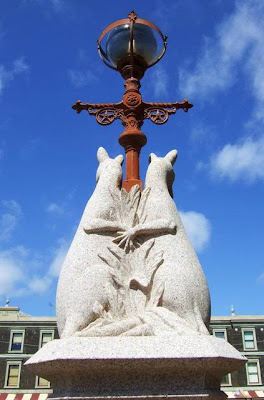 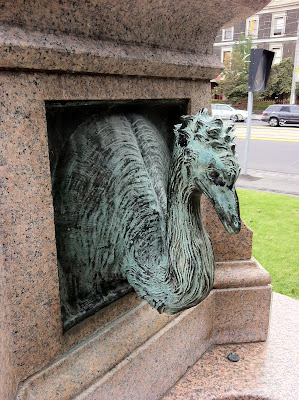 These are in turn set upon a low, muscular plinth of similar material into the sides of which are introduced satisfactorily ovoid, protruding basins on Romanesque-izing half columns, above which are also set bronze high reliefs, each depicting the head, neck, and shoulders of an inquisitive, if slightly bad-tempered emu, presumably keeping watch over the basins. 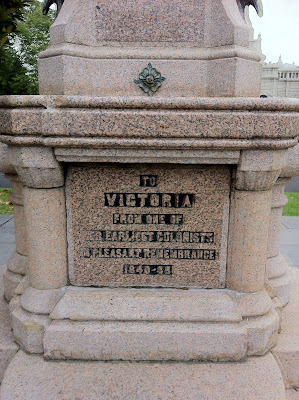 There is also a bronze plaque on the front, which reads, delightfully: “TO / VICTORIA / FROM ONE OF / HER EARLIEST COLONISTS / IN PLEASANT REMEMBRANCE / 1840–88.” 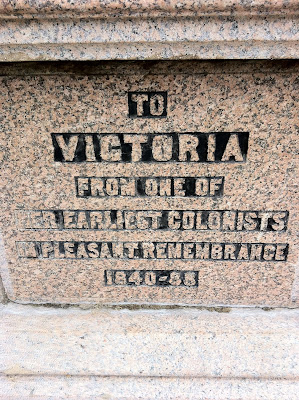 I carefully noted this down, to the surprise of a couple of indolent junkies, and resolved to discover the identity of this discreet but public-spirited benefactor upon my return to New Haven, Conn. It didn’t take long. First thing this morning I found that the composer was William Westgarth (1815–1889) who arrived in Melbourne on December 13, 1840, and in due course became prominent in the Melbourne Mechanics Institute, the Benevolent Society, and most if not all of the fledgling institutions of civil society in the Port Phillip District, as it was before 1851. Westgarth entered the Legislative Council of New South Wales as a representative of the region, and was an early advocate of Separation. His Observations on the Present Commercial, Agricultural, and Civil Condition of the Australian Colonies, was published in Leith in 1844. A Report on the Condition, Capabilities and Prospects of the Australian Aborigines followed in 1846; then Australia Felix; or, a Historical and Descriptive Account of the Settlement of Port Phillip in 1848; Victoria: Late Australia Felix in 1853; a revision of James Bonwick’s Discovery and Settlement of Port Phillip in 1856, along with Commerce and Statistics of Victoria, From the Commencement of the Colony; Victoria and the Australian Gold Mines in 1857; Australia: Its Rise, Progress, and Present Condition in 1861; The Colony of Victoria … Down to the End of 1863 in 1864; at length, the entirely vivid and engaging and extraordinarily useful Personal Recollections of Early Melbourne and Victoria in 1888, and, finally, in 1889, the year he died suddenly of injuries sustained whilst attempting to open the attic window of his house in South Kensington, Half a Century of Australasian Progress, a Personal Retrospect. Mr. Westgarth’s keen interest in drinking fountains arose from his longstanding commitment to the temperance movement, and this one was created to coincide with the Centennial International Exhibition of 1888. Victoria’s founding fathers thought globally, not nationally or even inter-colonially, and certainly not within closely drawn metropolitan boundaries, so why on earth was the crazy decision made lately to recast one of their most ambitious intellectual and institutional legacies under the dismal rubric “Melbourne Museum”? Someone should reverse it, soon.

Posted by Angus Trumble at 1:18 PM