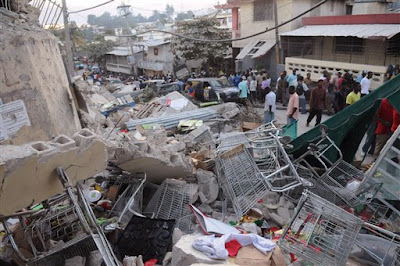 A massive earthquake destroys much of London. Buckingham Palace is flattened. The Archbishop of Canterbury is crushed to death at Lambeth. Thousands of other Londoners are killed beneath the rubble; scores are grievously injured, hundreds of thousands languish without food, clean water, medicine, or shelter. The world launches a massive relief effort, with assurances of sympathy, solidarity, and practical assistance over the long term. The special relationship is invoked. At Heathrow, U.S. Marines airlift distressed survivors to safety. After a long flight in cramped conditions, these British evacuees—none of whom has a criminal record—are processed at customs and immigration in Boston, but found to lack the appropriate travel documents and visas. They have nothing but the clothes on their back, and are severely traumatized. Nevertheless they are detained, locked up pending deportation proceedings, and the key is thrown away—notwithstanding the fact that the same authorities responsible for their arrest have since the earthquake indefinitely suspended deportations to Britain.
This scenario is, of course, a preposterous invention, and the main premiss would be inconceivable, impossible… unless you substitute Port-au-Prince for London, Haiti for Great Britain, and Miami for Boston. Incredible as it may seem, there were according to Thursday morning’s New York Times at least thirty blameless Haitian evacuees locked up in the Broward County Transitional Center in Pompano Beach, Florida, and all efforts to secure their release had thus far been unsuccessful. Pro bono advocates discovered them there in February, quite by accident. According to the Times, since their detention these people had little or no access to mental health care, nor to Creole-speaking relations who were more than willing to take them in, and wanted to know how they were getting on. Some had been transferred to farther distant “facilities,” and were gradually being absorbed into the vast national grid of detention centers—in other words jail. It is the kind of nightmare one associates with Franz Kafka, the cruelest and most pointless gulags, or Argentina’s dirty war; not, I think, with a great nation that is proud to describe herself as the Land of the Free. But like all the worst nightmares, this one is real. And the racial dimension is sickening. Can you imagine this treatment being meted out to a couple of displaced scaffolders from Slough, a schoolteacher from Reading, or an orderly from Guy’s Hospital?
It is a supreme paradox of modern America that, once exposed by a great newspaper of public record, an incredible administrative blunder such as this—the product of bureaucratic inertia, short memories, long distances, and general apathy—can be partly fixed within twenty-four hours, well before the end of Holy Week. Most but not all of the Haitian detainees have now been let go. Still, it is terrifying that unless someone in authority in Washington, D.C., had gotten a nasty little surprise whilst scanning the front page of the New York Times on Thursday morning, and received (let us hope) a robust follow-up call from the White House, these unfortunate people might still be locked up.
Posted by Angus Trumble at 1:19 PM