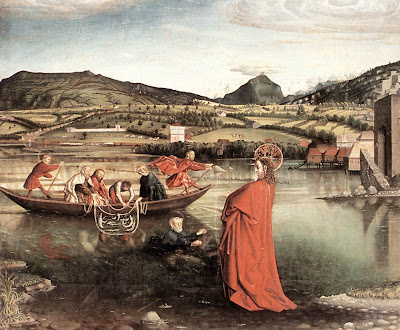 As usual, distraction in church: “So Simon Peter went aboard and hauled the net ashore, full of large fish, a hundred and fifty-three of them; and although there were so many, the net was not torn” (John 21:11). Why 153? It’s not a prime number. Mea culpa, Greta: 153 ÷ 51 = 3. Anyhow, it’s there in the Greek: “ἑκατὸν πεντήκοντα τριῶν,” in other words 153, which was for Jerome a piece of cake in terms of translation, “centum quinquaginta tribus,” 153, but not of interpretation. There are, he posited in his prologue to John, 153 varieties of fish. 153 nations were known in antiquity, it was once claimed. A sum total of 153 persons received direct blessing from Christ, a tally made by the pious Lieutenant-Colonel F. Roberts of the Indian Army, who appears to have had a considerable amount of time on his hands, or not nearly enough to do. Gregory and Augustine saw in this number an amplification of the seventh prime number, viz. seventeen, to which much symbolism was attached in Classical antiquity—because, according to that doggedly learned low-church divine E. W. Bullinger (1837–1913), it was held to be “the sum of two perfect numbers—seven and ten—seven being the number of spiritual perfection, and ten of ordinal perfection.” Gregory applied to this principle a Trinitarian gloss, and got to 153 by multiplication (17 x 3 x 3). By contrast, in his Tractatus in Evangelium Ioannis, Augustine used that staple of ancient Roman commerce, simple addition, most probably using the fingers of his left hand (1 + 2 + 3 + 4 + 5 + 6 + 7 + 8 + 9 + 10 + 11 + 12 + 13 + 14 + 15 + 16 + 17 = 153). For an extensive and wholly bizarre summary of these patristic and other efforts to interpret the exact significance of 153, see Bullinger’s dotty Number in Scripture, p. 273 ff., evidently thanks to the internet now much consulted by persons of questionable sanity, as well as quacks, religious maniacs, and the bogus numerology set. Perhaps the best recent comment is that of Professor Richard Bauckham, who, referring explicitly to John 21:11, writes: “Such evidence should not be misused. On the other hand, in many cases the detail is, of course, significant detail, with a clear role in the narrative, while, on the other hand, vivid detail is the stock-in-trade of a skilled storyteller, such as the author of this Gospel most certainly was [and/or the author of this significantly later epilogue-like portion of it]. All the same, these details do help to give readers the impression that the Gospel portrays the Beloved Disciple as an observant witness of what happened” (Jesus and the Eyewitnesses: The Gospels as Eyewitness Testimony, Grand Rapids, Mich.: Eerdmans, 2006, p. 399). In other words the issue of 153 ties to that of reliable testimony, person-to-person transmission through the second and third quarters of the first century, in other words orality. There were 153 fish, no more and no less. This thing happened; they were totted up by a prudent eyewitness, who committed the number to memory. You can count on it.