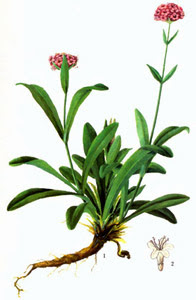 Six days before the Passover, Jesus came to Bethany, where Lazarus was, whom Jesus had raised from the dead. There they made him a supper; Martha served, and Lazarus was one of those at table with him. Mary took a pound of costly ointment of pure nard and anointed the feet of Jesus and wiped his feet with her hair; and the house was filled with the fragrance of the ointment. But Judas Iscariot, one of his disciples (he who was to betray him), said, “Why was this ointment not sold for three hundred denarii and given to the poor?” This he said, not that he cared for the poor but because he was a thief, and as he had the money box he used to take what was put into it. Jesus said, “Let her alone, let her keep it for the day of my burial. The poor you always have with you, but you do not always have me.”

This remarkable story appears in all four Gospels, which agree substantially on points of detail. I wondered, however, about that “pound of costly ointment of pure nard,” and trotted home to check. Fortunately the Greek and Latin tally perfectly, and as far as I can see there are no substantive variants among early witnesses. Matthew (26:7) gives alabastron murou barutimou, which goes straight into the Vulgate as alabastrum unguenti pretiosi, literally an alabaster [flask or little bottle] of [very] expensive ointment.

Most if not all English translators and exegetes beginning with the King James Bible opt for “ointment,” with its pleasing medicinal hint, presumably helped along by the Latin unguen, –inis, which implies fatty texture, even greasy. However, according to Liddell and Scott muron literally means oil extracted from plants, hence various senses of oil, unguent, ointment, balsam, and perfume are all equally possible. As usual, context is everything.

Luke (7:37), meanwhile, shortchanges us with alabastron murou (alabastrum unguenti), literally an alabaster [flask or little bottle] of ointment/unguent/perfume, so we may assume that the author(s) of Luke was as uninterested in fine fragrance as St. Jerome.

However, as usual John (12:3) comes up trumps: litran murou nardou pistike polutimou (libram unguenti nardi puri pretiosi), literally a pound (12 ounces) of [very] expensive pure oil of spikenard. The fact that the “osme...murou” (12:3), i.e. explicitly the fragrance of the ointment/unguent/perfume eplerothe (i.e. like “plenary”), in other words literally fills the house—this settles the question in my mind. The “woman” (Matthew and Mark), the female “sinner” (Luke), or Mary the sister of Lazarus used not ointment, but oil, specifically perfumed oil, and here begins to decant from a twelve-ounce bottle the equivalent of several ounces of Joy Parfum by Jean Patou, the original 1930 masterpiece by Henri Alméras, one of a handful of the greatest perfumes of all time, in which most of the roses grown commercially in Bulgaria still end up. The current price of twelve one-ounce bottles is $5,400 before tax. Emptying merely one would be like setting off a bomb at the fragrance counter at Bergdorf Goodman. I don’t propose to try it. The point is therefore not just about apparently wanton extravagance, but about an essentially subversive gesture of almost reckless theatricality, and hi-octane sensory impact, word of which must have reached far beyond Bethany.

Now, in antiquity alabaster vessels came to Israel from Egypt, but the heads of the spikenard plant (which yield the oil) came all the way across Central Asia, hence the enormous cost. Spikenard (i.e. Nardostachys grandiflora or Nardostachys jatamansi, also called nard, nardin, and muskroot) is a flowering shrub of the Valerian family that originated in the foothills of the Himalayas, on both sides, that is in modern China, Pakistan, India, and Nepal. If you want to find out what it smells like, check out L’Arome d’Egypte by Parfums des Beaux-Arts.

The observation about smell in John is so rare, and so vivid, that you cannot help but connect it with the observation about the condition of the four day-old body of Lazarus, whom Jesus brings back to life a little earlier at 11:39. Indeed Jesus himself explicitly makes the mortuary point at 12:7, when rebuking Judas Iscariot. In a sense it is frankincense and myrrh all over again.

Myrrh (Balsamodendron myrrha) grew in Yemen and North Africa, and the pulverized dried leaves, pods, and berries bound in oil were definitely used as a perfume qua perfume, no doubt about it (e.g. Psalm 45:8; Proverbs 7:17; Song of Songs 1:13, etc. ), as well as for “the purification of women” (Esther 2:12), and, of course, embalming, which is how we treat it through rather leaden association at Mark 15:23, but also (most unusually) in John, where at 19:39 Nicodemus brings myrrh and aloes that really are there for the grim business of dressing Jesus’ body for burial.

Frankincense (Mark 15:23) was specifically for liturgical burning, and mostly composed of various kinds of gum such as gum arabic. The fragrance, though, came from a particular resin that was collected by slitting the bark of an Indian tree (Boswellia serrata). You find frankincense right through the Old Testament, but it is generally mistranslated as “incense,” which is technically not the same thing. The references to “incense” at Isiah 43:23 and 60:6, and in Jeremiah 6:20 (as an expensive import to Arabia) are specifically to frankincense. The Hebrew word is Lebhonah, and it gave the translators of the Septuagint a terrible headache. Probably the reason for this is that frankincense came in two ways, “seasoned with salt” (Exodus 30:34-35), or “sweet,” i.e. no salt (Exodus 25:6, Leviticus 10:1). Any other sort of incense was “strange incense,” and could not be offered (as in Exodus 30:9, cfr. Leviticus “strange fire,” which is the same thing, 10:1).

Evidently the people of Israel extended principles of quality control to fine fragrance. The interesting part is that I cannot see any explicit connection in scripture between frankincense (Lebhonah) and funerary rites, until post hoc when it was convenient to make one (Revelation 8:3).