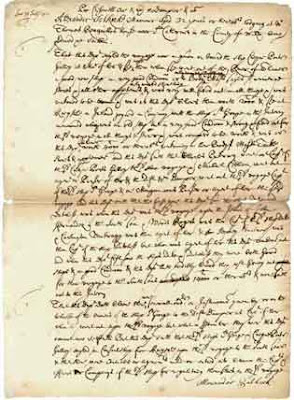 The marriage in 1764 of our four times great grandparents Mr. and Mrs. Peter Travers deftly combined at least three substantial legacies carefully husbanded in Plymouth during the first half of the eighteenth century, and prudently bequeathed by one close-knit generation of Huguenot merchants to the next. Mr. Travers’s father was an industrious watchmaker. Mrs. Travers’s parents were Mr. Peter Paré and his wife Mary, the daughter of a M. Mignan, formerly Mignon, sometime comte de la Chaussée de Poitou. Mr. Paré accumulated a considerable amount of property in and around Plymouth anyway, but thanks to the generosity of Mrs. Paré’s unmarried brother, John Mignan, who died in 1754, Mrs. Travers and two of her female cousins shared in the residue of his considerable estate, although, by virtue of having been prematurely widowed, as a bonus Mrs. Paré’s older cousin Mrs. Pitman got the use for twenty-one years of Mr. Mignan’s brand new house “on Hardy’s Lands,” and the gift of his sedan chair; perhaps she was lame, or portly, or both. Mr. Mignan’s will survives in the probate records of the National Archives at Kew, and is of some interest. It identifies this gentleman as a religious “enthusiast” through his association with the famous “primitive” Calvinist Methodist divines George Whitefield and Howell Harris of Trevecka in Breconshire, Wales. Mr. Mignan was obviously practical, seeing fit to leave his clothes to a young unmarried manservant Samuel Price (plus £10!), but only if Samuel stayed at his post until the very end. But who were Ann Simon (£5), and Sarah Tippett (50s), and especially Charity Perdue to whom Mr. Mignan left his house, “courtilage,” and garden in Gascoin Street, Plymouth? (In property law a curtelage is the enclosed area of land surrounding a “dwelling-house.”) And where did this leave the current, indeed soon-to-be-previous occupant Elizabeth Barker? In the conventional manner of eighteenth-century legal drafting, the document is a colossal, relentlessly unpunctuated sentence written out in longhand. For ease of comprehension I have inserted punctuation.

“John Mignon of Plymouth in the County of Devon, merchant, being of sound and disposing mind, memory, and understanding, and calling to my Remembrance the great uncertainty of this Transitory life, do make, Publish, and declare this my last Will and Testament, humbly recommending my Soul to Almighty God, in hopes of mercy and forgiveness for all my Sins, and my Body commit to the Earth to be decently interred at the discretion of my Executors hereinafter named, and as for my Temporal estate, I dispose thereof in manner following, that is to say, I give and bequeath to my Kinsmen Stephen Mignan and Peter Paré both of Plymouth aforesaid two hundred Pounds in the Three percent Annuities of the year One thousand seven hundred and forty three In Trust to permit and suffer my Sister Susanna Boutet to receive the Interest or Dividends thereof during her Life, separate and apart from her Husband, and without being Subject to his Management or control, and, after her decease, In Trust to permit and Suffer her Daughter Magdalen Boutet to receive the Interest of the said two hundred pounds during her Life and after her Death In Trust to divide and pay the said Principal sum of two hundred pounds to and amongst my said Sister Susanna Boutet and such of her children as shall be then alive; I give and bequeath to my Neice Magdalen Pitman, Widow, All that my new Erected Dwelling house which now almost finished situate in Plymouth aforesaid on part of Hardy’s Lands which I lately purchased To hold to her and her Assigns for and during the term of Twenty-one years from the time of my death, and also I give her the Chair that I am now carried in; I give and bequeath to Charity Perdue all that my house, Curtilage and Garden with the appurtenances situate in Gascoin Street within the Borough of Plymouth now in the possession of Elizabeth Barker To hold to her and her Assigns for and during the term of her natural Life, and I also give her the sum of five pounds; I give and bequeath to my Brother in Law Isaac Chardavogne One hundred pounds; to my Brother Mignan five pounds; to Ann Simon five pounds; to the Reverend Mr. Bordier five pounds; to Mr. Philip Gibbs ten pounds, to the Reverend Mr. [George] Whit[e]field ten pounds, to Mr. Howell Harris of Trevecka in [Breckonshire] Wales ten pounds, and I further give to the said Messrs. Whit[e]field and Harris thirty pounds in trust for them to distribute at their own discretion amongst such of the Preachers and Teachers of the Gospel as they shall think fit; I give to Mr. John Stephens late of Plymouth and Mr. Thomas Adams now of London and Mr. Howell Harris’s Wife five pounds a-piece; to my servant Samuel Price if he is living with me at my death, and not otherwise, Ten Pounds and all my Wearing Apparel; To Sarah Tippett fifty shillings; I give devise and bequeath to my said Kinsman Stephen Mignan and Peter Paré and the Survivor of them his and their Heirs and Assigns All my Mossuages, Lands, and Tenements whatsoever In Trust nevertheless and to the End and purpose that they, the said Stephen Mignan and Peter Paré or the Survivor of them his and their Heirs and Assigns of such Survivor as soon as can be after my death, may sell and dispose of the Reversions and Inheritance of all and singular my said Messuages [i.e. dwelling-houses including outbuildings, orchards, curtilages, or court-yards and gardens], Lands, and Tenements for the most money that can be had for the same and, after all my Debts, Legacys, funeral Expenses, and other charges and Expences whatsoever are fully paid and discharged, for them, my said Trustees, to divide and distribute the neat proceeds of all my said Real Estate, as well as the residue of such Personal Estate as may dye Possessed of, in four equal parts, that is to say, to and amongst my said Nephew Stephen Mignon and my three Neices Mary Paré, Magdalen Pitman, and Lydia Sanford, share and share alike, and I do hereby constitute and appoint my said Kinsman Stephen Mignan and Peter Paré joint executors of this my last Will and Testament, desiring them to see the due Performance thereof and hereby I revoke all my former Wills whatsoever, In Testimony whereof I, the said John Mignan, have hereunto set my hand and seal the Twenty Fourth day of April in the Twenty second year of the reign of our Sovereign Lord George the second, by the Grace of God, of Great Britain France and Ireland King Defender of the faith, and so forth, in the year of our Lord one thousand seven hundred and forty nine—[squiggle] The mark of John Mignan— Signed sealed and declared by the said Testator John Mignan as and for his last Will and Testament in the Presence of us who have Subscribed our names as Witnesses hereto in his presence and at his request

Posted by Angus Trumble at 3:03 PM