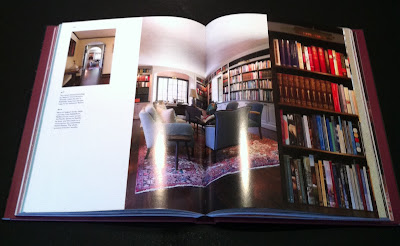 Late last summer, Hollister Hovey and her sister Porter—friends of a friend—came to photograph my house and interview me for one of the chapters of a book they were doing entitled Heirloom Modern, which has now been sumptuously published by the House of Rizzoli. It is, as the cover copy states, about “homes filled with objects bought, bequeathed, beloved, and worth handing down.” It was a lot of fun watching them work—while, of course, being sure to let them get on with the job unmolested by proprietorial interference or heavy-handed art direction manqué. But it is an especially intriguing and distinctly odd experience to reabsorb my house as it now appears in the pages of their beautiful book. On the whole, I would say that it does a splendid job of representing these rooms as I have configured and arranged and decorated them since I bought the place a few years ago, and therefore, I suppose, of displaying me too. I did not do this unaided. George Knight designed my library; Leland Torrence managed the building of it, and Jared Nixon was my painter—and a truly brilliant one. Since the Hoveys were here I have rationalized the books, so that Australiana and Asiatica (on the east wall, naturally) face off Britain (west) while dictionaries, encyclopedias and other works of reference fit snugly in between (south), while three times great-grandmother Jane Pearson presides over the fireplace (north), but the effect is not radically different. The other amusing aspect of participating in an exercise of this kind is the surprisingly puffy air of satisfaction I have derived from comparing my house with other people’s, and it is comical to reflect upon the fact that they are probably experiencing exactly the same thing.
Posted by Angus Trumble at 11:58 AM